Aberdeen put their weekend thrashing by Celtic behind them with a 1-0 Scottish Premiership win at Hamilton Academical.

Lewis Ferguson first-half strike was enough to move Derek McInnes' side up to fourth in the table after Kilmarnock's defeat at Motherwell.

It is also their fourth clean sheet in their last five away league matches.

They had numerous chances to add to their advantage, too, and McInnes will be disappointed the margin of victory was not larger.

Hamilton drop below St Johnstone and Hibernian and down to 10th in the league standings.

Dons only lacking in front of goal

After last week's dismal first-half showing at Pittodrie against Celtic, in which they conceded four goals, Aberdeen's first-half performance at Hamilton could not really have been much better.

McInnes said before the game that he wanted to see "a response". He wanted to "show the supporters there is belief and confidence within the team, that there is an aggressive team there".

Well, they certainly didn't look like a team who were low on confidence. They were aggressive, they pressed and harried Accies, and broke with speed and purpose throughout the whole game.

When Ferguson rifled in at the near post after a training ground free-kick routine caught Accies defenders napping inside the opening quarter of an hour, it felt as though the result was a foregone conclusion, even at that early stage. And in reality, it was. Lewis Smith's long-range effort, which was exquisitely tipped over by Joe Lewis, was Accies' only real chance, and even that came out of nowhere.

Aberdeen, however, could have scored at least as many as Celtic put past them on Sunday. Cosgrove, who was up against a 20-year-old and a 17-year-old in Sam Stubbs and Jamie Hamilton respectively, will be disappointed that he was not able to his tally of six league goals. Especially as all three of his glorious chances were from point-blank range.

McGinn against Martin proved to be another interesting battle. The most interesting thing being how long it would take McGinn to get past his man every time he received the ball. In fairness to the Accies right-back, the Northern Irish winger was in inspired form and nearly capped off his performance with a stunning, curling effort which cannoned back off the cross-bar.

The star of the show, however, was Ferguson. Before the game, McInnes spoke about how important the young midfielder is to his side and he demonstrated that here.

His first goal was spectacular, and he nearly grabbed a wonderful second. His ingenuous overhead kick looped over Owain Fon Williams but not beyond the man on the line. It would have been fitting given his performance, but he'll just have settle for being the match-winner. 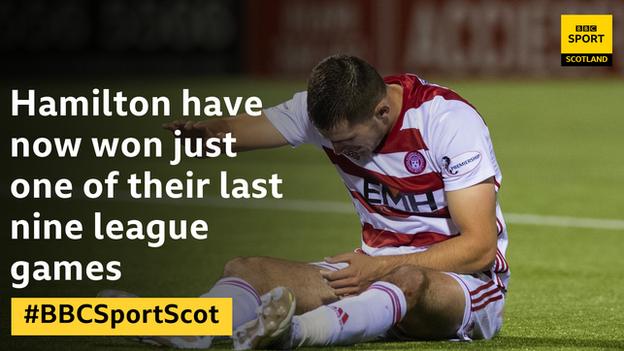 Man of the match - Lewis Ferguson

McGinn was particularly impressive on the left for Aberdeen and was instrumental in supplying a couple of chances for Cosgrove with deliveries from the wide area.

But Ferguson was top man. Not only did he score a well-worked goal, he came close to adding a second with an opportunistic overhead kick, a skill which is becoming a bit of a trademark.

His powerful play in the midfield ensured Aberdeen would not be as passive as they were without him against Celtic. His tidy competent performance showed just how valuable he is in the engine room.

'We should have been out of sight' - reaction

Hamilton head coach Brian Rice: "I'm delighted with how my young lads played. The energy and enthusiasm - everything we didn't do on Saturday. We had a few chances, it was swinging back and forward.

"It's disappointing to lose a goal to a set-piece. It's still a young and new team with a lot of changes, but we need to get better and quickly."

Aberdeen manager Derek McInnes: "I'm delighted with all three points, that's what we came here for. I'd have taken 1-0 before the game, such was the importance of getting a bit of momentum.

"The performance was excellent, I thought we should have been out of sight. Some of our play tonight was terrific. It was just disappointing we never scored more."