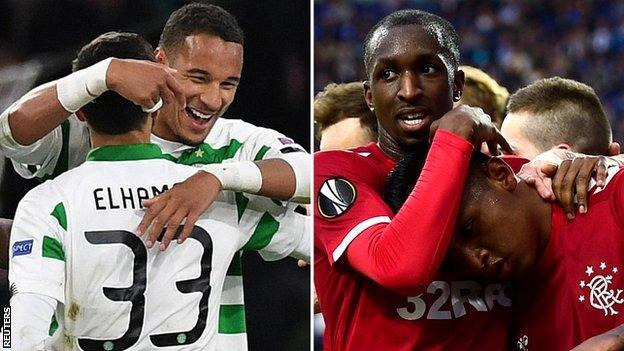 If someone had suggested at the start of last season that Celtic and Rangers would face Lazio and Porto in Europe and emerge with four points between them, they might just have been laughed at.

But the improvement by the Old Firm in Europe is notable - and a shot in the arm for the reputation of Scottish football.

BBC Scotland takes a look at just how Celtic and Rangers have turned their fortunes around in recent season and what it means for Scottish football.

It's worth noting the quality of teams Celtic and Rangers were up against on Thursday. Rangers earned a deserved point against a Porto side who reached the Champions League quarter-finals last season - and the last 16 the year before that.

Although Sergio Conceicao's men have not quite hit the heights set recently, having lost key players, they have undoubted quality - as demonstrated by Luis Diaz's stunning opener.

It was just over two years ago that then Rangers manager Pedro Caixinha was standing in a hedge remonstrating with fans after the club's worst-ever continental defeat at the hands of Progres Niederkorn. The transformation is extraordinary.

As for Lazio, they may have only qualified for the Europa League as Coppa Italia winners but they have their sights firmly set on a top-four finish in Serie A this season and boast the league's top scorer so far this season in Ciro Immobile - and one of Europe's hottest talents in Sergej Milinkovic-Savic.

For a young Celtic side to recover from a disappointing first half to turn the tables on Simone Inzaghi's side deserves huge respect.

How have they got to this point?

Celtic goalkeeper Fraser Forster made the point after the Lazio win that Celtic "don't fear anyone" in Europe. Rangers manager Steven Gerrard has repeatedly said likewise.

And it's no wonder given the two Glasgow sides have played a combined total of 52 European matches between them in the last two campaigns. They've become seasoned European campaigners, having lost just 10 of those games.

Since Gerrard took charge, Rangers have lost just three matches in Europe, all of which have come away from Ibrox. They've kept 15 clean sheets and only conceded more than once in a European game on four occasions - and only twice did they lose having done so. Their resilience has been seriously impressive.

As for Celtic, their attack has vastly improved even on last season's run in Europe. As they struggled for inspiration in Brendan Rodgers' final season, they netted 17 goals in their first 11 matches on the continent but have managed an extra 10 over the same period this term.

Although Rodgers was criticised for being too open in Europe, Celtic have showed far more intent in Neil Lennon's time so far but have also conceded the same amount of goals. In short, the Scottish champions have been more entertaining to watch while also getting better results.

What does it do for the coefficient? 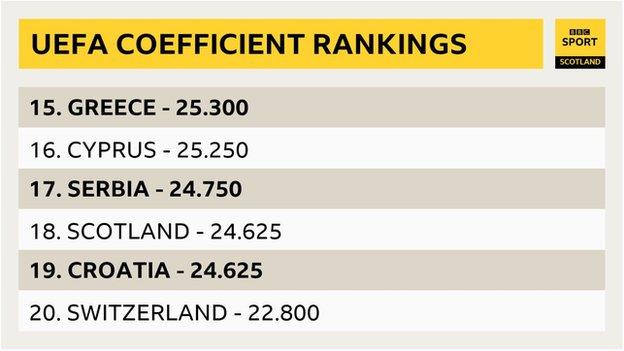 Scotland have edged up one place to 18th from the start of the season - above Croatia - having accumulated 6.500 points to amass a total of 24.625.

Last term, Scottish Premiership clubs claimed a total of 6.750 - a mark likely to be breached given Celtic and Rangers have a guaranteed six fixtures remaining before Christmas.

Just ahead in the Uefa coefficient ranking are Serbia, Cyprus and Greece - all of whom also have one or two teams left in European competition.

But, as it stands, Scotland will start next season in 15th place, which should earn the country a second Champions League place for the 2021-22 season.