Arsenal and Manchester City's Women's Super League meeting on Sunday saw the Gunners bounce back from defeat by Chelsea and win 1-0.

We asked you to pick a combined XI - and below is who you selected, as of Sunday at 17:00 GMT.

Which players made it? Don't worry if you missed out, there's still time to select your team below. 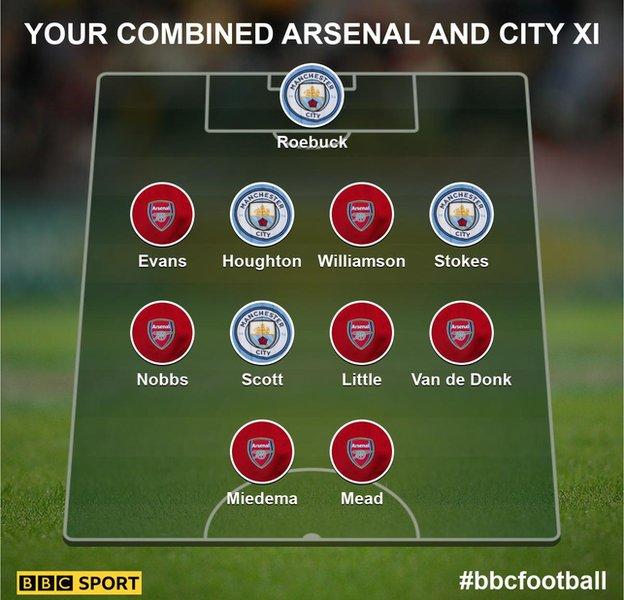 Despite finishing on the losing side, Man City and England captain Steph Houghton was the most selected player.

Goalscorer Vivianne Miedema was also picked alongside her team-mate Beth Mead. In the end, Arsenal had seven players to Man City's four, but there was no place for player of the match Lia Walti from the Gunners.

What was the pundit's choice? - Rachel Brown-Finnis

Goalkeeper: "Although Manuela Zinsberger has made a difference for Arsenal, Ellie Roebuck has been solid and I like how she's really comfortable playing out of the back. She's the future for England in goal."

Defenders: "I love the speed of Lisa Evans, the composure and ball-playing ability of Leah Williamson - who can also step into midfield - and Steph Houghton is a great leader in the backline, while Tabea Kemme brings pace down the left flank."

Midfielders: "In holding midfield, although City have got Keira Walsh, Arsenal's Lia Walti breaks up play and is a more definitive holding midfielder. Choosing England's Jill Scott and Scotland's Kim Little means I'm leaving out Danielle van de Donk and Jordan Nobbs but it's tough - you could have any of those in there. Jill always makes a difference. When she doesn't play, you notice that something's missing."

Forwards: "For the front three, Beth Mead is on fire and she's been exceptional. Lauren Hemp has proven she's a natural on the left side, and then there's the Netherlands' Vivianne Miedema at number nine, without a doubt."

Match prediction: "The depth of Arsenal puts them ahead of City in my book and, based on form after City's League Cup loss to Manchester United, Arsenal are the favourites on Sunday, plus defender Aoife Mannion's injury is a big loss for City.

"It should be a ding-dong battle. I'm so excited to watch the game. It'll be the game of the season so far."

Your combined Arsenal and City XI

Have your say by picking your combined Arsenal Women and Manchester City Women XI, as the two teams meet in the Women's Super League on Sunday.

BBC Sport has launched #ChangeTheGame to showcase female athletes in a way they never have been before. Through more live women's sport available to watch across the BBC in 2019, complemented by our journalism, we are aiming to turn up the volume on women's sport and alter perceptions. Find out more here.