A soggy Saturday in the EFL saw its fair share of talking points.

After numerous pitch inspections up and down the land saw six games postponed, the majority of matches escaped unscathed by the weather - although it might take until next weekend for the players, and fans to dry out.

BBC Sport takes a look at five things you may have missed...

You would have thought Charlton scoring a stoppage-time penalty at Championship leaders West Brom to earn a 2-2 draw would make the headlines.

But not in this game.

The huge talking point came midway through the second half when referee Matthew Donohue sent off the wrong Baggies man.

Nathan Ferguson went in hard on Chris Solly on the halfway line, but much to everyone's bemusement Donohue waved the red card at Albion midfielder Grady Diangana.

Cue huge protests on the West Brom bench, manager Slaven Bilic getting (even more) furious, and after what seemed an eternity, Donohue consulted with his assistant and fourth official and sent off the right man.

Christmas may be a banned word for most people in late October, but Exeter's 4-0 thumping of Plymouth in League Two's Devon derby got everyone feeling a bit festive.

It was the Grecians biggest win over their fiercest rivals since another four-goal victory on Christmas Day in 1925.

But it was not a happy return for the Pilgrims as Nicky Law's double either side of the break and second-half goals from Tom Parkes and Randell Williams moved Exeter up to second.

Just to rub salt into the Albion wounds, the hosts only had four shots on target - they all went in.

Miss of the season?

It may be a little early to start dishing out end of season awards, but Birmingham City striker Lukas Jutkiewicz may well scoop an unwanted honour come May.

With the goal gaping in front of him, the big Englishman sliced Kerim Mrabti's cross wide from a couple of yards. Had he scored, it would have been 2-0 to Blues and probably game over.

Shock horror, Luton equalised midway through the second half.

But eight minutes from time, Jutkiewicz redeemed himself by nodding in the winner.

"From the bench it looked like he could make it but in reality it was further away and he could not reach it - that's what he told me. But I will watch it again," Birmingham manager Pep Clotet said.

Don't worry Lukas. It's easily forgotten with three points in the bag.

Saturday's early kick-off in the Championship looked set to be a cracker.

A Yorkshire derby between Sheffield Wednesday and Leeds United with the teams starting the day in third and second respectively.

It might have taken a brave person to pick a winner from the two promotion hopefuls but one thing that it looked safe to say was that we'd see some goals.

Leeds had not been involved in a 0-0 since August 2018, while the Owls had not played in a scoreless match since April. And, if that wasn't enough, the two hadn't played out a 0-0 draw since April 1 1969.

I feel like you know where I'm going with this now...

Records are there to be broken I guess. 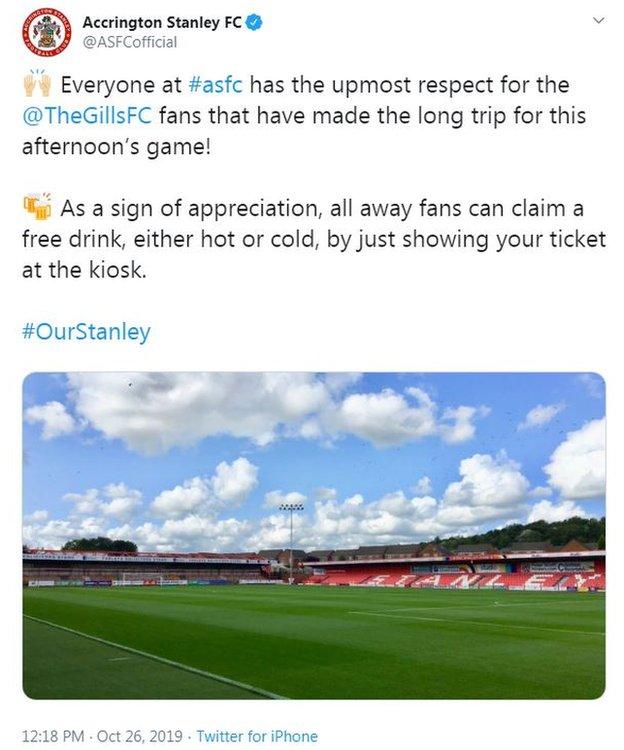 Given the filthy weather conditions that swept the country over the 24 hours before Saturday's game, Gills fans, who were yet to see their team win away from home this season, could have been forgiven for feeling they were better off stopping at home when they got on the coaches this morning.

Fortunately not only was the game on but Accrington extended some pre-match hospitality to the 241 hardy souls who made the trip to Lancashire in the form of the promise of a free beverage when they arrived.

Stanley's generosity didn't end there, Reece Charles-Cook grabbed the only goal of the game as the visitors ended their wait for an away victory.

"Some of our away performances have been very good and there's been five draws, which is too many," boss Steve Evans told BBC Radio Kent.

"Thanks to every fan who came up because there's been horrendous conditions all over the country."