Having watched Newry City dump his side out of the League Cup, Glenavon boss Gary Hamilton took matters into his own hands - literally.

The former Portadown and Glentoran striker named himself in the Lurgan Blues starting XI for the first time in the league since February.

It almost produced the ideal outcome as Glenavon were denied a confidence-restoring win over Crusaders after Paul McElroy's late equaliser in Saturday's late kick-off at Mourneview Park.

Glenavon looked to have snatched a comeback victory after goals by Jordan Jenkins and Stephen Murray turned the game on its head after Jamie McGonigle's first-half opener.

And while a point leaves Hamilton's side in tenth place (albeit with a game in hand), they certainly seemed to turn a corner during a gutsy display against the Crues.

"I thought they were outstanding, each and every one of them," beamed Hamilton. "Back to the Glenavon we know."

Glenavon have a tough run coming up, with home games against Cliftonville and Linfield either side of back-to-back away dates with Coleraine and Glentoran.

That may look daunting, but if they play with the same intensity and spirit they showed against Crusaders, it wouldn't be surprising to see results turning in their favour.

Echoes of the past

Coleraine keep marching on and now stand solely at the top of the table, a point above Cliftonville.

While much is made about their unbeaten campaign thus far, perhaps the most impressive fact about Oran Kearney's men is that they have now completed home-and-away doubles against Linfield and Crusaders.

Given their place at the summit, it's difficult to avoid comparisons to Kearney's class of 2017/18 when the Bannsiders pushed Crusaders all the way to Gibson Cup, eventually finishing two points shy.

En route to that runners-up finish, Coleraine won two out of their eight league meetings with Crusaders and Linfield.

With four under their belt already this term, Kearney seems to have his steely glare trained on going one better and delivering Coleraine's first league title since Bertie Peacock's heroes of 1974.

After the heartbreak of 2018, can Bannsiders' fans now dare to dream?

New Warrenpoint Town boss Barry Gray said his side would be resigned to a bottom-two finish if they lost against Carrick Rangers.

After seeing his side go down to a late goal, the former Cliftonville boss stood by those remarks.

"In my opinion, this is a case of trying to get to a play-off spot," said Gray.

"I think based on current form, I think that's our only realistic task. We needed to keep Carrick closer to us today, but we're taking it one step at a time."

Gray has always been refreshingly forthright in interviews, but his comments could be construed as pessimistic given he has just been re-appointed.

Saying that his players can, realistically, only target 11th spot won't exactly inject confidence into a squad that has already been on the receiving end of a few thoroughly dispiriting defeats this season.

Then again, considering that they are already eight points adrift of tenth-placed Glenavon having played two games more, maybe Gray is wisely narrowing the parameters to temper expectations and rescue 'Point from the wreckage that has been their league campaign.

Larne stuck in a 'rut'

All is not well at Inver Park.

Warrenpoint and Glenavon will tell you that Larne retain the capacity to prise defences open at will, but after thumping six past the latter, Larne have failed to win any of their last four in all competitions.

They suffered late heartache against Cliftonville at Solitude, lost in the league and cup to Glentoran before being held by Institute on Saturday.

Sean Connor's men were good value for their point at Inver, too, and while the north west side celebrated a hard-earned point, Tiernan Lynch was left to reflect on another frustrating afternoon.

"It was a hugely frustrating and disappointing afternoon," said Lynch.

"It was a game we felt we could and maybe should have won.

"It's a confidence thing at the moment - we've got ourselves into a bit of a rut with not winning games and putting the performances in that we'd like. We have to work hard to get ourselves back out of it."

We've seen Larne at their free-flowing best this season. They're a joy to watch. However, 16 points from 12 games is a modest return for a club of their ambitions, and a squad of their quality.

Having also exited both cup competitions, the pressure to turn things around continues to build.

Gormley one of the greats 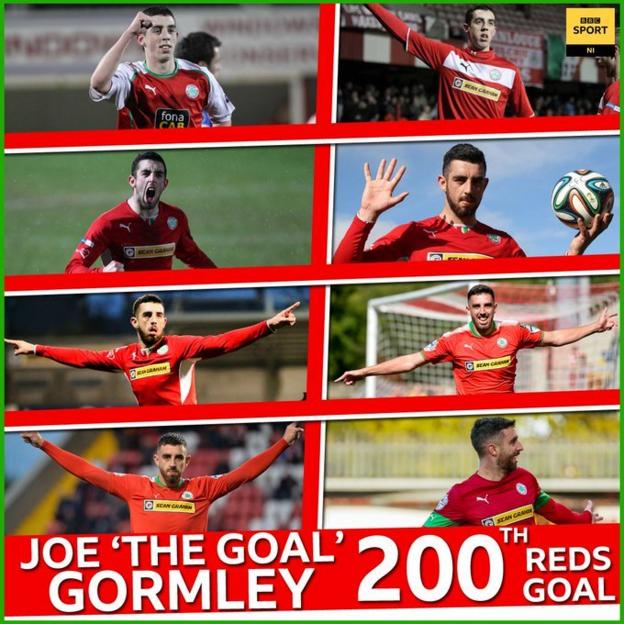 We'll save the final word for Joe 'The Goal' Gormley who, in the space of nine devastating minutes against Dungannon Swifts, demonstrated why, by the time he hangs up his boots, he'll have a strong claim at being included on the Mount Rushmore of Irish League strikers.

Gormley, like he has done to so many teams over the years, put the Swifts to the sword, netting a nine-minute hat-trick.

His second goal saw him reach 200 for Cliftonville.

Not content with reaching the double century, however, he decided to get started on reaching 300 as he completed his hat-trick in some style.