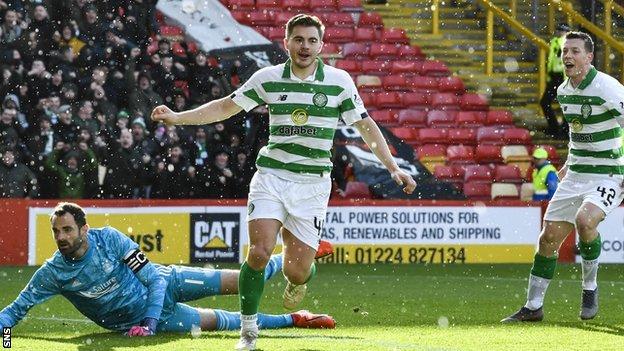 Manager Neil Lennon praised his "ruthless" Celtic side as they romped to a 4-0 win at Pittodrie.

The champions made it 12 goals in eight days, following up their 6-0 win over Ross County and Thursday's 2-1 Europa League win over Lazio.

The exertions in midweek had no ill-effects on Celtic as they strolled to their biggest win at Pittodrie since February 2008.

"It was a special 45 minutes off the back of a great week," said Lennon.

"I have to pay enormous credit to the players, they were outstanding."

All of Celtic's goals arrived in a devastating first half, with Odsonne Edouard, Jeremie Frimpong, James Forrest and Mohamed Elyounoussi on target.

Aberdeen offered little fight as the visitors strolled to the three points after their midweek exertions.

"We were ruthless," Lennon told BBC Scotland. "The confidence, quality and the athleticism of the players was all in evidence.

"We're in a good place at the minute. We're not getting carried away, but to come here and win as emphatically as that is very pleasing.

"Mentally and physically it could have been draining for them but they recovered brilliantly and played some outstanding, collective team football. We were red hot today, absolutely red hot.

"It is just outstanding football, outstanding control of the game. We were magnificent, you can't ask any more."