Premier League leaders Liverpool fought back from a goal down to beat Tottenham in a pulsating match at Anfield on Sunday.

Harry Kane gave Spurs the lead after only 48 seconds but Jordan Henderson levelled at the start of the second half and Mohamed Salah's late penalty gave Jurgen Klopp's side a vital victory.

"It was a massive win for Liverpool, because they knew they could not afford to drop any more points after drawing with Manchester United last week," said MOTD2 pundit Ian Wright.

"What I liked is that their manager showed again that he can change things mid-game if they are not working. They found a way to win."

Here, Wright and Crouch explain what a rejuvenated Spurs side got right before the break, and the part Liverpool captain Henderson played as his side turned things around to clinch their ninth victory from their first 10 league games.

First half - a perfect Pochettino performance 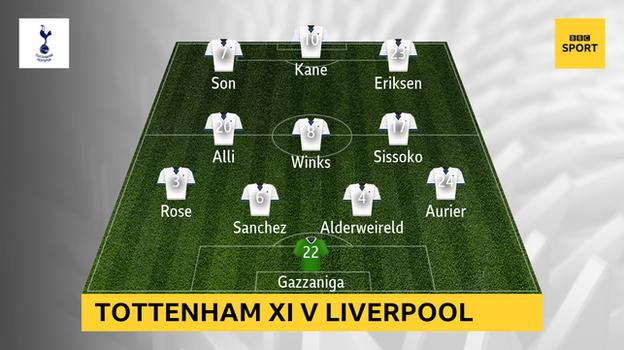 Wright: "Tottenham goalkeeper Paulo Gazzaniga was magnificent but what really impressed me about Spurs was how they had their old intensity back.

"Right from the start, everyone was closing Liverpool down and making life uncomfortable for them. They put them under pressure by coming out quickly, and getting in their faces.

"When they won the ball back, they had plenty of bodies going forward with pace too."

Crouch: "That was exactly how Tottenham got their goal, with Harry Winks on the front foot, and forcing the mistake.

"Then they had Moussa Sissoko breaking from midfield, bringing the ball forward. He slipped in Son Heung-min, who was incredible defensively for Spurs but also showed what an effective attacker he is too.

"Son fired in a fantastic shot that was deflected against the bar, but Harry Kane did what he does best, controlling his header and making the finish look very simple."

Wright: "Son's first-half display summed up what Spurs did so well before the break. He was brilliant defensively, but still an attacking threat.

"As we showed on MOTD2, he was always very quick to get into Trent Alexander-Arnold's face, rushing him, and forcing him to go inside where Spurs had numbers."

Crouch: "Defensively, it was the sort of performance we have not seen enough from Spurs this season. There was a desire about them when they did not have possession.

"They were in their shape but they were getting up to the ball, engaging the Liverpool players, making tackles and putting them under pressure.

"When you do what Spurs were doing so well, and getting so many men forward when you get the ball back, that is not a defensive way of playing. They caused Liverpool a lot of problems with their counter-attacks." 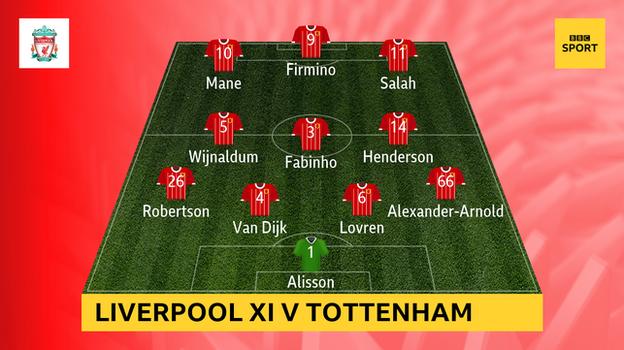 Wright: "The question at half-time was whether Tottenham could keep going, and continue to work so hard to defend their lead. They did that, but Liverpool still found a way through."

Crouch: "If something is working for the opposition, Liverpool have to find a way to combat it.

"They did that against Spurs, just as they did against Manchester United last week, and again it involved Jordan Henderson moving over more to the right-hand side - this time to help Trent Alexander-Arnold out on that flank against Son and Danny Rose.

"Henderson was just amazing, really. I think a lot of his work goes un-noticed but in the past couple of league games, he has shown how important he is to the team.

"There were times when Liverpool were defending he was still one of their three men in midfield but he was also getting out wide and nullifying Rose's threat down that side.

"Henderson made an impression going forward too. When his side were attacking, he was bursting forward down the flank, pushing Rose back and giving him something else to think about.

"He was over-lapping Alexander-Arnold at times, getting crosses in to create chances - and he got his goal on the back post, which is where a right-winger would be."

Wright: "Spurs were well organised and gave everything, but in the end Liverpool just wore them down.

"The penalty that won them the game came from a mistake by Spurs defender Serge Aurier, after a long ball and a foot race between him and Sadio Mane, but Liverpool won the game because they just kept on going forward in search of goals."

Crouch: "The moment that Mane got the ball, we said there was a potential car-crash happening. Aurier had no awareness of where Mane was.

"Mane was clever and got his leg in there, between the defender and the ball, but that is not just one penalty that Aurier concedes - it is two or three. He catches him a few times.

Wright: When Salah puts the penalty away, people might think the keeper has not moved but he has just jumped off the ground at the exact time Mo has hit it.

"What impressed me most about Liverpool is their patience and the fact that, after their near-miss last season, they know what it takes now to win the title.

"They know draws are not good enough for them now, they have to go for the win - and this time they found another way of getting it."

Crouch: "The amount of balls Liverpool put into the box means they are always so dangerous - I was watching them, thinking 'I wish I was playing in that team'.

"Some of the crosses Alexander-Arnold sends over are just unbelievably good and, although Roberto Firmino is not the tallest of players, he is constantly on the end of them.

"He was a whisker away from putting a couple of them away on Sunday and, as a striker, your eyes light up when you see someone getting that kind of service.

"Sometimes that way of playing can become predictable and teams can find a way of stopping you - like United last week, and Spurs in the first half on Sunday.

"But when that happens, Liverpool just find another way of playing and another way to win the game. It bodes well for their title challenge that they keep on doing it."