Former Manchester United and Chelsea boss Jose Mourinho is keen to return to English football because of a desire to win major trophies with a third Premier League club. (Sky Sports)

Mourinho would be interested in the Arsenal manager's job if it became available. (ESPN)

Manchester City want to re-sign England forward Jadon Sancho from Borussia Dortmund, but the 19-year-old, who was at City's academy before moving to Germany, would cost more than £100m. (Sport Bild, via Sport Witness)

Bayern Munich are looking at Tottenham manager Mauricio Pochettino as a possible replacement for manager Niko Kovac. (Sport1, via Sun)

LA Galaxy general manager Dennis te Kloese plans to meet Zlatan Ibrahimovic, 38, to discuss the Swedish striker's future with a view to keeping him at the club. (ESPN)

AC Milan are ready to make another move to try to sign Liverpool and Croatia defender Dejan Lovren, 30. (Tuttosport, via Mail)

Juventus are willing to sell Croatia striker Mario Mandzukic, 33, to Manchester United or Sevilla in January, but want £4.6m. (Calciomercato, via Mirror)

Bale's agent, Jonathan Barnett, has rubbished rumours that the Welshman is set to leave Real Madrid and join a Chinese club. (Independent)

German side Schalke want to keep Everton loanee Jonjoe Kenny at the club beyond this season. The 22-year-old right-back is on a season-long loan. (Liverpool Echo)

Bara Votikova is an author, comedian, presenter and Czech Republic number one.

Paris St-Germain and Brazil forward Neymar, 27, must change his ways to be treated with more respect and has "the sensibility of a child", says former team-mate Dani Alves. (Spor TV, via Independent)

Brazilian striker Joao Pedro, 18, has finally been granted a work permit and will join Watford in January. The Hornets agreed a £2m deal with Fluminense in October 2018, but have been waiting on his work permit application. (Standard)

The agents of some of Tottenham's players are looking into whether their clients should be paid extra for appearing in an Amazon documentary about the side's season. (Mail) 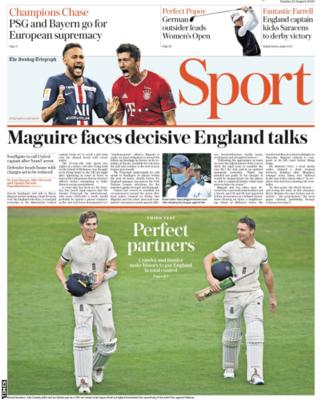