Twenty-four teams, 51 matches in 12 cities from Bilbao to Baku - Euro 2020 promises to be a finals like no other.

Gone is the usual country-wide party in a host nation as Uefa splits the festivities across a continent instead - but where are the games being played, why, and can you still get tickets?

These 16 teams will compete in the play-offs, with four qualifying: 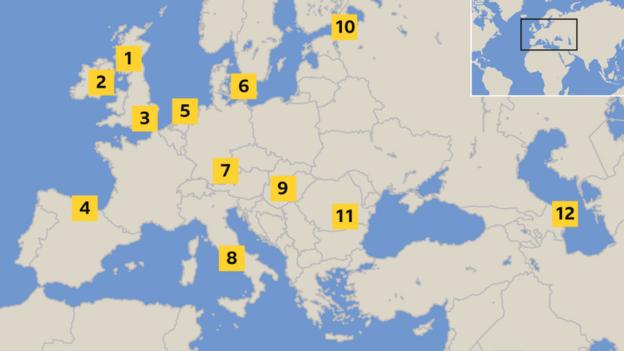 Like the World Cup, the Euros are usually spent in one (sometimes two) countries every four summers, giving fans the chance to soak up some culture, plenty of sun and a last-16 defeat.

For the 2020 edition, Uefa decided that more is more. Twelve host nations have been selected, with group games spread across four time zones and nearly 4,000 miles. Stick some new tyres on the car or get ready to do some inter-railing...

Yes, Bucharest and Budapest are similar names, aren't they? No, we won't do a story when you book to go the wrong one.

Wembley has seven games because it picked up a number of matches which were originally allocated to Brussels. Half of the host nations are staging a senior men's major international tournament for the first time: Azerbaijan, Denmark, Republic of Ireland, Hungary, Romania and Scotland.

Why are the games all over Europe?

Pragmatically, it has been suggested that the tournament has been broken up to spread the cost of hosting it. France managed the job perfectly well in 2016 but interest in hosting 2020 was a bit thin on the ground.

The only bids for the finals came from Turkey, a joint effort from Ireland, Scotland and Wales and a joint bid from Georgia and Azerbaijan. That's despite total tournament revenue in 2016 of 1.93bn euros - up 34% on Euro 2012.

After that Uefa announced the decision to take the tournament on the road.

Then Uefa president Michel Platini said: "If you need to build airports or 10 stadiums in a country, this would be rather easy because it would be one stadium per host city."

No stadiums were built specifically for the tournament in the end, although Hungary's Puskas Arena is new, opening earlier this month.

Where are the home nations going to be playing?

The top two teams in each group go through to the last 16, along with the four best third-placed finishers.

World Cup semi-finalists England are the top seeds in Group D and will play all three of their group games at Wembley. If they win the group they would head to Dublin for the last 16 - probably against Germany, France or Portugal. If they are runners-up they head to Copenhagen, if they finish third and qualify it could be Bilbao, Glasgow or Budapest.

Wales, who have qualified for their third major tournament, will play against Switzerland and Turkey in Baku and then Italy in Rome.

Scotland and Northern Ireland - plus the Republic of Ireland - are all in the play-offs, which will be held on 26 and 31 March.

Scotland need to get past Israel at home and then Norway or Serbia away to qualify. Northern Ireland could host the Republic in the final if the neighbours win away to Bosnia-Herzegovina and Slovakia respectively in the semis.

Can I still get tickets?

This summer 19.3 million requests were submitted for the 1.5 million tickets that were made available. According to Uefa, there were 1.9 million tickets requested for the final at Wembley alone - 22 times the capacity of the stadium.

That means plenty of disappointed fans across Europe, who are now part of the Uefa 'Fans First' programme, meaning they get the first shout on the next tranche.

The next opportunity to apply for tickets will be in December - but not all fans will be able to buy them. These tickets will be made available through national associations such as the Football Association.

Will there be fan parks?

A huge success in host cities at major tournaments over the past 15 years or so, official fan parks give those supporters in host cities without a match ticket somewhere safe and suitable to watch the games in huge numbers.

Some cities have revealed where these 'fan villages' will be held (Munich's is at the old Olympic Stadium, Budapest revellers head to Heroes' Square) but most are yet to be confirmed. Follow the noise.

Isn't this all terrible for the environment?

Times they are a-changing. In a world where Coldplay are cancelling world tours because of the environmental damage they cause and the carbon footprint of flying is increasingly on the agenda (Ajax announced they would travel to Lille this season by train rather than by plane), perhaps sending football teams, staff, media and fans across a continent isn't the wisest idea?

Uefa has paired two host cities per group in a bid to keep distances down, and while some are fairly manageable (there's about 400 miles of road between London and Glasgow, and Budapest and Munich, for example) the sides joining Italy in Group A are looking at a 2,500-mile trip each way to Baku from the Italian capital.

Italy are playing all of their group games in Rome, but the winners of that group then travel to Wembley for the last-16 match - a four-day train journey from Azerbaijan...

So a lot of travelling. But Uefa is addressing the concerns, planting 50,000 trees in each of the 12 host cities and hoping to offset its estimate of 405,000 tonnes of carbon produced by fans and Uefa staff travelling to games.

President Aleksander Ceferin said: "The nature of the tournament means there are many benefits over a traditional one. In addition to being able to take the matches to more diverse communities across Europe, there is no need either to build a host of new stadia or the transport links that they need, which carry a huge environmental cost in concrete and other resources.

"But it also has a cost - with increased travel for fans to watch their teams play. Uefa takes its responsibilities on this seriously and it is right that we offset the carbon emissions that causes."

It feels pretty wide open. Will no side having 'home' advantage play a part?

The bookmakers in the UK have World Cup holders France as favourites, ahead of England (who could play all but two of their games at Wembley on the way to a potential final), Belgium, Germany and Spain.

If France boss Didier Deschamps lifts the trophy he would become the first person to win the World Cup and European Championship both as player and manager.

Holders Portugal, with Cristiano Ronaldo now up to 99 international goals, are 12-1 shot. Ronaldo holds the record for most games (21), most goals (nine, joint with Platini) and most tournaments with at least one goal (four) at the European Championship.

The Portuguese forward is also the European player with the most appearances at major tournaments, World Cup and Euros combined (38, joint with former Germany midfielder Bastian Schweinsteiger).