Managers under pressure - who could go where?

Chris Hughton and Rafael Benitez are candidates to take over at West Ham United - who are without a win in seven games - if manager Manuel Pellegrini is sacked. (Guardian)

Sheffield United manager Chris Wilder is also in the frame to be the next Hammers boss after guiding the newly promoted side to sixth in the Premier League. (Mirror)

Napoli manager Carlo Ancelotti had been in the frame to take over from Mauricio Pochettino at Tottenham Hotspur, but was "too expensive" and Spurs opted for Jose Mourinho instead. (Mail)

The secrets to Sheff Utd's success...

Borussia Dortmund's 19-year-old England forward Jadon Sancho - who is a target for Manchester United - says he is not looking to leave the German club in January, despite feeling like a "scapegoat" for his side's poor run of form. (The Athletic, via Metro)

Manchester City's England forward Raheem Sterling, 24, is refusing to sign a new contract with the Premier League champions - worth £450,000 a week - unless manager Pep Guardiola also commits his future to the Etihad Stadium club. (Talksport)

Arsenal could miss out on Barcelona's 26-year-old centre-back Samuel Umtiti, with the France international preferring a return to former club Lyon if he leaves the Nou Camp. (L'Equipe - in French)

Real Madrid and Belgium forward Eden Hazard, 28, says he hopes France international Mbappe joins him at the Bernabeuwithin the next couple of years. (Marca)

Everton boss Marco Silva has ruled out a January loan move away from Goodison Park for 19-year-old forward Moise Kean and insists the Italian has the right attitude to succeed at the club. (Star)

Chelsea owner Roman Abramovich is fully involved in running things at Stamford Bridge and will not entertain "bargain bids" for the Premier League club. (Guardian)

Wolves' 18-year-old under-23 centre-back Owen Otasowie - who qualifies for England, Nigeria and the United States - is wanted by French champions Paris St-Germain, German side Schalke, as well as Premier League sides Arsenal and Liverpool.(Sun)

Celtic boss Neil Lennon has been told to expect a transfer battle for Tottenham midfielder Victor Wanyama because a number of Premier League clubs will be interested in signing the 28-year-old Kenya international. (Express)

West Ham are preparing to sell 33-year-old Colombia midfielder Carlos Sanchez, who is out of contract at London Stadium next summer, in January. (Sun)

Aston Villa and Scotland midfielder John McGinn, 25, is staying at Villa Park despite reports he will leave in January. (Star)

Bournemouth's Scotland winger Ryan Fraser has been linked with Everton, Liverpool and Arsenal when his contract expires next summer, but the 25-year-old is not yet close to making a decision about his future. (Mirror)

Brescia's Italian striker Mario Balotelli, 29, has been told to show more "enthusiasm" if he wants to win his place back in the team. (Mail) 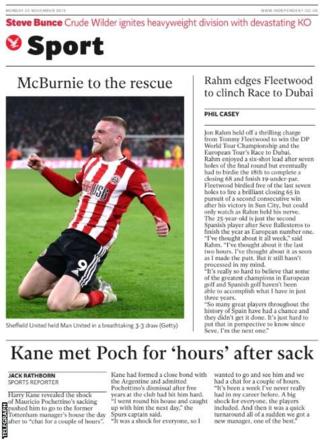