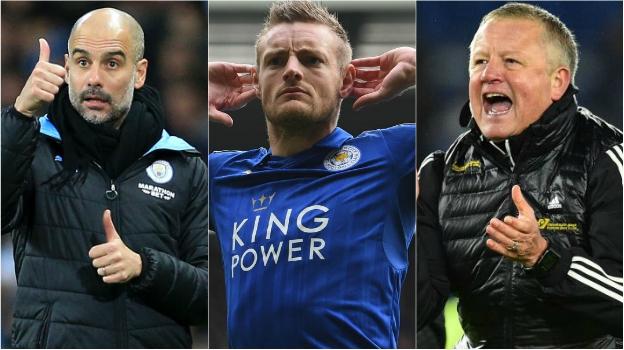 The end of 2019 is almost upon us, and what a year in football it has been.

Manchester City won the Premier League title for a second consecutive year, Liverpool became European and world champions and Jamie Vardy turned into Benjamin Button to produce one of his most prolific 12 months of his career.

So, as this time is usually a period to reflect upon the good and the bad of the year gone by, we here at BBC Sport consider some alternative football awards.

From the best player to the biggest meltdown, here's our completely unofficial and by no means deadly serious list.

Jamie Vardy has been a player reborn in 2019.

By the end of last year, Vardy's goalscoring record looked every bit that of a player heading into his twilight years as he reached Christmas with six goals in the first half of the 2018-19 season.

However, this year he has been back to his very best. He has scored 29 goals - 12 in the first half of the year and 17 in the second to date.

There is no doubt that the arrival of Brendan Rodgers has sparked Vardy's revival. Since the Northern Irishman's appointment on 26 February, Vardy has failed to score in only 12 games.

He's also managed to do all of this while having to suffer taunts from opposition fans due to the spat between his wife Rebekah Vardy and Coleen Rooney.

There's been some big individual performances from a variety of players in 2019 but there's little doubt that it's... Jamie Vardy's year.

Manager of the year - Chris Wilder

OK. He may have only been a Premier League manager for half the year but it is hard to argue with the job Chris Wilder has done in that short time.

Sheffield United were the overwhelming bookies' favourites to suffer immediate relegation to the Championship following their impressive promotion, but under Wilder they have defied expectations to instead find themselves fifth in the table.

The job Wilder has done is even more impressive when you consider the limited budget he has at the Blades and how he has managed to turn players who rarely excelled in the Football League into very solid Premier League performers.

You could throw a dart at a number of names on a wall for this one. Should it go to Manchester United for another year of underperforming? Or maybe Marco Silva for falling short at Everton despite a summer of big spending?

Both are plausible options but neither have arguably fallen quite so far in such a short space of time as Arsenal.

From top-four regulars and having one of the longest-serving managers in football to plodding about in mid-table and appointing a second permanent manager in 18 months, it has been quite a step change for the Gunners.

For that reason, they are the underachievers of the year.

Plenty of clubs spent big in the summer in an effort to improve their side and hopefully challenge higher up the table.

Arsenal splashed out a club record £72m to sign Nicolas Pepe, Tottenham spent £53.8m on Tanguy Ndombele while Manchester United brought in Harry Maguire from Leicester for £80m - a world record fee for a defender.

Back in August, BBC Sport readers voted for who they thought was the signing of the summer and it was Pepe who came out on top.

That's not quite worked out, and while there is time for Pepe to come good it's not going to happen before the end of 2019.

So instead, the star performer we have picked out is Youri Tielemans.

The Belgian midfielder joined Leicester initially on loan in January before making his move a permanent one in the summer for a club record £40m.

Tielemans is now a key component in one of the strongest and most exciting midfields in the Premier League and, considering some of the enormous fees spent elsewhere, he is looking like the bargain buy of the summer.

Mason Mount pulled off a hilarious prank while on holiday with his childhood friend in the summer, and then kindly stuck it on Instagram for us all to see. 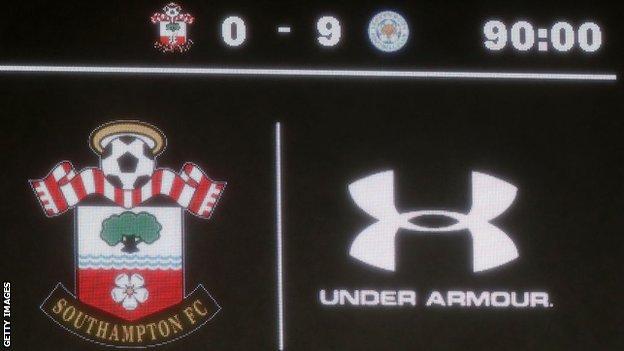 Losing 9-0 in five-a-side is bad enough, so to lose at home by that scoreline in a Premier League match is, well, off-the-scale levels of embarrassment.

On a landmark night, the Foxes also:

Grim reading all round for the Saints.

"Cry in the beginning so you can smile in the end."

It was an emotional Women's World Cup in more ways than one for Brazil legend Marta.

During the tournament the 33-year-old became the all-time leading scorer at men's or women's World Cup finals after taking her tally to 17. However, Brazil's tournament came to an end at last-16 stage as they beaten by France in extra time.

In the immediate aftermath of the defeat, Marta looked directly down a pitch side camera and, with tears in her eyes, delivered a powerful and emotional message for girls aiming to follow in her footsteps.

Read it here, and feel inspired.

Meltdown of the year

If there's been a spike in managers' blood pressure in recent months, it wouldn't be a surprise if VAR were the cause of it.

The technology has led to some frustrating moments for those on the touchline and in the stands as they've celebrated goals, only to see them ruled out after a review.

Poor Pep Guardiola has had more than his share of VAR misfortune.

It played a significant part in Manchester City's elimination from the Champions League at the hands of Tottenham in April and again went against his side in their crucial Premier League tussle with title rivals Liverpool in November.

When VAR did not award a penalty after the ball struck Trent Alexander-Arnold on the arm, it proved too much for Guardiola as he suffered an astonishing meltdown, raging at the fourth official.

'Twas a quiet morning on 9 October, when at 10:29 BST an unexpected storm began.

Wayne Rooney's wife, Coleen, caused an absolute Twitter meltdown when she released a statement about somebody allegedly leaking stories about her family to the press.

The statement, written in a way which kept its readers on tenterhooks, didn't land the final blow until a dramatic last line. A 10-dot ellipsis built-up enough tension before she revealed the suspected culprit was indeed.......... Rebekah Vardy's account.

Let's recap, shall we?

And then came the replies...

Scoring a hat-trick in a game can be counted as a very good day at the office.

Scoring a double hat-trick is an excellent day in the office.

Scoring a double hat-trick and providing four assists in the same game? Well, you should be allowed to retire early.

It is the biggest win in Women's Super League history and you can watch Miedman's masterful display below.