There is less than a mile between Goodison Park and Anfield, but the current gulf between Everton and Liverpool has arguably never been bigger during the Premier League era.

The Reds are European champions, unbeaten league leaders and in the form of their Premier League life under manager Jurgen Klopp.

By contrast, the Blues have gone 23 seasons without a trophy, are just above the relegation zone and reported to be on the verge of sacking manager Marco Silva.

There was a time in the mid-1980s when the two monopolised English football; Howard Kendall, Peter Reid and Neville Southall in the blue corner, Joe Fagan, Alan Hansen and Kenny Dalglish in the red, going toe-to-toe for every domestic trophy.

But over three decades of increasing Liverpool dominance later and with 16 league places, 26 points and a starkly different emotional outlook currently separating the sides, Wednesday's meeting could well be the most one-sided Merseyside derby in a generation.

A short but painful trip

Historically, the journey across Stanley Park to Anfield has not been a pleasant one for Everton.

They have not won there this century - their last victory a 1-0 win on 27 September 1999, courtesy of a Kevin Campbell goal - and have only left the ground with three points on seven occasions since World War Two.

It has been 19 derbies since they tasted victory at either Anfield or Goodison - when Tim Cahill and Mikel Arteta secured a 2-0 Blues home win on 17 October 2010.

It was not that long ago that the two were both competing at the right end of the table. When Brendan Rodgers' Reds narrowly missed out on the title in 2013-14, Roberto Martinez's Blues were finishing fifth and qualifying for Europe themselves.

But since then, there has only been one moment at which Everton's points total over a rolling 38-game period has been greater than Liverpool's. And this advantage lasted only three games. 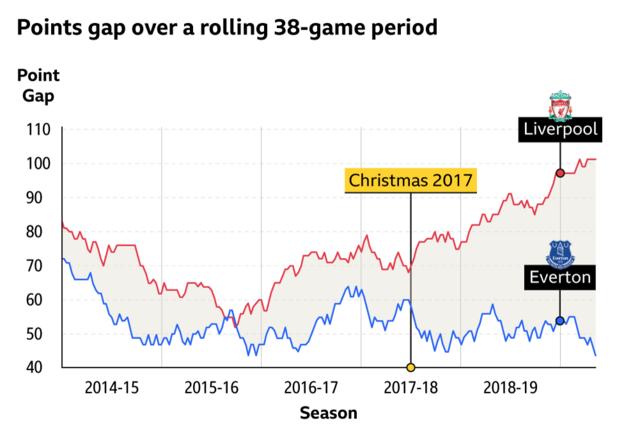 As the above graph illustrates, Liverpool's points total over the course of the preceding 38 matches has been superior to Everton's from the second half of 2015-16 onwards (20 March 2016 to be exact).

From Christmas 2017 - when the difference between them was down to eight points - the Reds have enjoyed a near constant upward trajectory, while the Blues have flatlined before slumping to their current low.

The present rolling 38-game points gap between the two of 55 is the largest it has been in Premier League history.

In addition, within only four of the previous 26 completed seasons has the gap between the two sides been greater than the current 26-point difference. And we've only had 14 games so far this campaign.

A glance at any of the prominent Everton fan message boards, makes for grim reading before Wednesday's game.

Barring the odd staunch optimist, the overriding mood is one of resignation at an impending defeat, with predictions veering from a cruel, farcical last-minute Liverpool winner (a la Divock Origi's Jordan Pickford-assisted goal last season) to complete an utter humiliation.

You can hardly blame Toffees fans for their dire outlook. They have won just once in their past 10 away league games, and this was at struggling Southampton. Any momentum they hoped to gain from this result has been wiped out and then some by a home loss to Norwich and Sunday's last-minute defeat at Leicester.

Silva was left fighting for his job after the Norwich game and is reportedly hanging by a thread after the video assistant referee decision that gave Kelechi Iheanacho an injury-time winner at the King Power Stadium.

If Silva is to get the win he and his side so desperately need they will have to achieve something no other side has managed in the league for 11 months.

The Reds at home are a tougher proposition still - you have to go back to 23 March 2017 for Liverpool's last home defeat in the Premier League.

Having won all but one of their 14 games so far in the league this season, they hold an eight-point lead over second-placed Leicester and an 11-point advantage over reigning champions Manchester City as they go in search of a first English top-flight title since 1990.

They are the best side in this country, in Europe and possibly the world, with four of the top seven players in the voting for Monday's Ballon d'Or currently at Liverpool - a testimony to the recruitment and training work at Anfield that has been sorely absent at Goodison.

"When majority shareholder Farhad Moshiri arrived at Everton in 2016, he had publicly stated ambitions of putting the club at the heart of what he called 'the Hollywood of football' in the north-west," says BBC Sport chief football writer Phil McNulty.

"Since Moshiri's bold statement, the Merseyside clubs have moved in completely opposite directions. Never will the chasm be illustrated more brutally than at a vibrant Anfield on Wednesday night.

"Everton's nerve has often failed them at Anfield, particularly under David Moyes, when they would often travel across Stanley Park in better form and higher in the league than their neighbours only to capitulate.

"If Everton could not find the will to win at Anfield when they were a very good side, what chance will they have in the current shambolic situation?

"One of the game's oldest cliches is that 'the formbook goes out of the window in derby games' - not when Everton play at Anfield. It would take a remarkable turnaround of form for Silva and struggling Everton to turn the course of history."

Football has a way of overthrowing the odds; its low-scoring nature in comparison to other sports often facilitating expectation-defying results. And there are factors in Everton's favour.

While no replacement for actual goals, the Toffees' expected goals performance this season suggests they are not as bad as the current table suggests.

An expected points table by Understat - a site dedicated to expected goals stats - has them seventh as opposed to 17th. 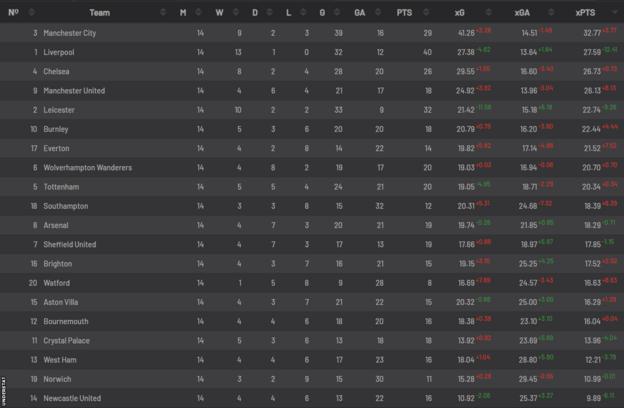 The Reds also have a couple of key players missing, with influential midfielder Fabinho injured and first-choice goalkeeper Alisson suspended following his sending off against Brighton at the weekend, meaning keeper Adrian is likely to be thrust into his first Merseyside derby.

In addition, there is the perceived galvanising effect of a game against a local rival.

Back in November 1994, Everton were deep in relegation trouble, bottom of the table with just one win from 14 games, but went to fourth-placed Liverpool and won unexpectedly under new manager Joe Royle. As Barry Horne told BBC Sport in 2018, the Blues' 2-0 victory was the springboard for them to survive the drop and go on to win that season's FA Cup.

Last season, Everton were underdogs for both games but were one of the few sides who managed to match Liverpool and were unfortunate not to pick up more than a point.

As former Reds defender Mark Lawrenson told BBC Sport: "This is a fixture that scares Liverpool fans. They know it is dangerous, because Everton will raise their game.

"From past experience, it does not matter where each team is in the league or how many points difference there is, because all the usual factors just go out of the window.

"There is no point looking at statistics to try to help you decide who will win this one. Everton have not won at Anfield for 20 years but it is going to happen at some point."

Analysis or instinct? The former suggests there can be only one winner on Wednesday but partly thanks to the latter there remains that crucial, enticing element of doubt.

The game may well appear one-sided, but that doesn't mean only one side can win it.

Additional research for this article was contributed by BBC Sport's Chris Collinson.