Lyndon Dykes scored a hat-trick as Livingston moved into the Scottish Premiership top six with an emphatic rout of Ross County.

The Livi forward added to Ricki Lamie's opener to blow away a County side that had been hit with a sickness bug during the week.

The Highlanders slump to eighth in the table after their eighth defeat of the league campaign.

Doubt during the week about whether the visitors could fulfil this fixture vanished when the virus running through Ross County cleared up. If they were hoping Livingston would be similarly off colour, they were sorely disappointed.

The visitors have every right to be sick of the sight of Gary Holt's side, having now conceded eight goals to them in their two meetings this season, the only times these teams have met in Scottish football's top flight.

No sign in the squad of stalwarts like captain Liam Fontaine, midfielder Michael Gardyne and striker Brian Graham indicated that the Dingwall sickness bug had indeed claimed some victims. They got no sympathy from their hosts.

That said, this was a slow-burner that was only sparked into life when Steven Lawless almost scored from a corner midway through the first half. His set-piece skipped right through the penalty box and much to County keeper Nathan Baxter's relief, didn't sneak in at his back post.

Baxter was then called into proper action to thwart the best bit of football in the half. Some lovely flowing play from Livingston ended with Scott Pittman cracking in a fine shot that Baxter did well to parry round the post.

The inevitable was simply delayed a few minutes. Livingston continued to rampage forward and when Alan Lithgow's long throw-in was touched on by Dykes, Lamie calmly caressed the ball in, looking more like an experienced striker than a left-back.

Just before half-time, the prognosis for struggling County got considerably worse. From a free-kick taken by their goalkeeper Matija Sarkic, a cute half-volley set-up from Lawless found Dykes in the perfect position to blast the ball past Baxter to double Livi's lead.

If the Highland side had passed pre-match fitness tests, they'd had enough of this game within minutes of the restart. Once again, as Livingston swarmed all over them, sensing weakness, County caved in. Pittman's pull-back was meant for Aymen Souda; it eluded him but not the predatory Dykes whose finish was true for his second and Livingston's third.

The hosts then contrived to miss an incredible chance. Lawless and Pittman exchanged passes as both broke clear, the latter unselfishly played in the former, taking the County keeper Baxter out of the equation. But rather than the back of the net, Lawless managed to find a covering defender who blocked his effort when it appeared easier to score.

Undeterred, Livi poured forward again. Marvin Bartley raced away down the right before planting the most appealing of crosses plumb on to the forehead of the diving Dykes who peeled away to celebrate his hat-trick to the soundtrack of Phil Spector's Winter Wonderland.

If not quite a wall of sound, there was certainly noisy appreciation of his - and his team-mates' - efforts from a home crowd acclaiming their biggest league win of the season. 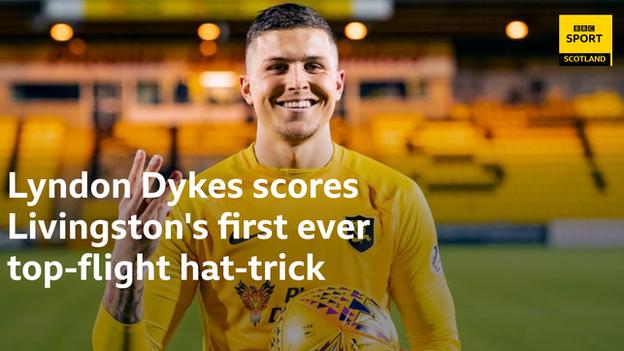 Man of the match - Lyndon Dykes

It's very hard not to give it to the hat-trick hero Dykes. Three very different goals, all well taken, in an all-round display full of verve, energy and attacking intent.

Several in Livingston jerseys vied for the honour, including Stevie Lawless, who was once again at the heart of much of the home side's creativity and invention.

But Dykes gets the nod, taking his tally for the season to nine, and extending Livingston's unbeaten streak to five matches.

Livingston manager Gary Holt said: "I'm really pleased that [Dykes] is getting in those areas and that's something we work on. He took his goals really well.

"Although we're in sixth place we should be higher. We should have more points and should be well clear of the bottom end of the table. It's halfway and that's all it is."

Ross County co-manager Steven Ferguson said: "We've had a difficult week, and it's the end of that very difficult week but it's certainly no excuse from our point of view.

"We thought we'd come into the game today thinking we could be competitive. The week certainly didn't help, but it's not an excuse."