St Johnstone and St Mirren slipped to just one point off the Scottish Premiership relegation play-off spot after a dull draw at McDiarmid Park.

A stalemate among Saints

St Mirren had only won one away game in the league this season, yet their bright start belied that poor record.

Although O'Halloran began with a speculative shot to test Vaclav Hladky just a minute into the game, St Mirren quickly wrestled control of possession.

Obika - the star of St Mirren's 3-3 draw with Livingston a week prior - was again the focal point of every attack. In the 18th minute the 29-year-old forward latched on to a poor Jason Kerr clearance to drive past Liam Gordon and fire a shot straight at home keeper Zander Clark.

Twelve minutes later the forward leaped into the air to get on to the end of a knocked-on header and send the ball just over the bar from a few yards out. The forward was getting into good positions but composure and a goal continued to elude him.

O'Halloran almost turned the game on its head when his perfectly-timed run beat St Mirren's high press and offered the winger another chance to get the better of Hladky. Yet, with plenty of time and the goal beckoning before him, O'Halloran failed to knock a tepid shot beyond the St Mirren keeper.

St Mirren dominance was followed by St Johnstone frustrations in the second half, as yellow cards for Anthony Ralston and Murray Davidson characterised a home side that were struggling to track and match their opponents.

Fortunately for Tommy Wright, St Mirren's chances dried up after the break, with an optimistic volley from Junior Morias flying high and wide.

Perhaps the best opportunity of the half came through central defender Sean McLoughlin, who got on the end of an Ilkay Durmus free-kick at the back post to fire the ball towards goal. Yet, like much of the match, the defender's attempt was a little off and flew in to the side-netting.

In the end a goalless draw seems fitting for the teams with the poorest offensive records in the division this season.

St Mirren won only their fourth point on the road and St Johnstone can now point to just one defeat in their last five league games. 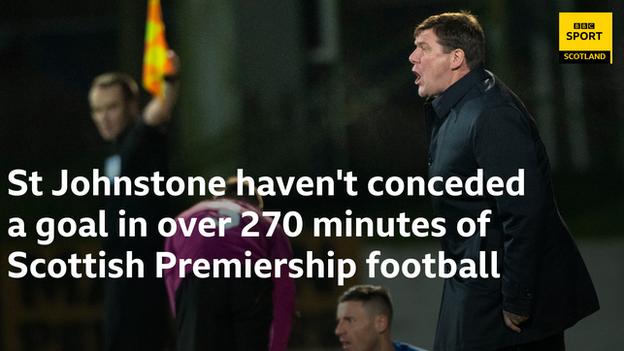 Man of the match - Cammy Macpherson

Cammy Macpherson was at the centre of most things that were good about St Mirren. His driving runs from midfield proved problematic for St Johnstone all day and he wasn't scared to try his luck in front of goal.

It was a mature performance by the 20-year-old, whose tireless effort and workrate were crucial to the Paisley side securing a precious point in Perth.

'An away point is always good' - reaction

St Johnstone manager Tommy Wright: "Overall we're disappointed with how we played but it's another clean sheet. It's another point. If we had taken that first chance I think we would have gone on to win."

St Mirren manager Jim Goodwin: "Away from home in this league, I think a point is always a good result. But over the balance of play we were probably, slightly, the better team. I'd suggest a draw was a fair result."