Arsenal midfielder Mesut Ozil, 31, is set to join Turkish side Fenerbahce on a six-month loan deal in the January transfer window. (Fotomac, via Football.London)

United players and officials are convinced Pogba has played his last game for the club and will leave in January. (Mirror)

If Carlo Ancelotti becomes the Everton manager his first transfer move will be an attempt to sign former Manchester United striker Zlatan Ibrahimovic, 38. The Swede becomes a free agent on 1 January when his contract with LA Galaxy expires. (Calcio Mercato)

Former Everton defender Alan Stubbs has paid tribute to Duncan Ferguson, saying he has given everyone at Goodison Park an incredible lift as interim manager and the appointment of Ancelotti would not be possible without him. (Talksport)

Former Tottenham Hotspur manager Mauricio Pochettino is holding off agreeing a deal with Spanish giants Real Madrid in case either Manchester City or Manchester United want him in the summer. (Sun)

Chelsea are among a number of Premier League clubs looking to sign Real Madrid and Brazil winger Vinicius Junior, 19, in January. (El Desmarque - in Spanish)

Arsenal and Gabon striker Pierre-Emerick Aubameyang, 30, is among a number of players who are considering their futures at the club. (Independent)

Belgian side Club Bruges want 30m euros (£25.6m) for 22-year-old striker Emmanuel Dennis, with Leicester, Brighton and Southampton among the clubs interested in the Nigerian. (Foot Mercato - in French)

Who did you name in the Premier League team of the decade?

Did these two make it? And how many current players get in?

Levy has also left the door open for former boss Pochettino to return to the north London side in the future. (Evening Standard)

Manchester United could have to pay a £12m agent fee to Mino Raiola on top of the transfer fee to complete the signing of Red Bull Salzburg and Norway forward Erling Braut Haaland, 19. (Sun)

Tottenham and Brazil midfielder Lucas Moura, 27, has admitted he was close to joining Manchester United in 2012 before eventually opting for Paris St-Germain. (ESPN Brasil - in Portuguese)

Rangers manager Steven Gerrard is considering another move for Liverpool youngster Herbie Kane in the January transfer window after the Scottish club were unable to agree a move for the midfielder last summer. (Football Insider, via Express)

Wales midfielder Joe Allen, 29, could leave Championship side Stoke City in January, although West Ham and Burnley have been put off by the £15m asking price. (Mail)

Former Liverpool and Germany midfielder Emre Can, 25, could hand in a transfer request at Juventus as he continues to struggle to get in the first team. (Goal) 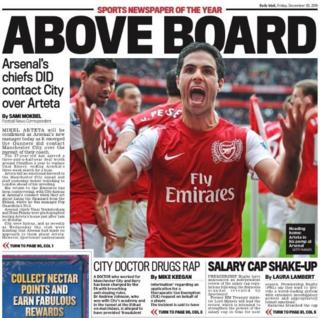 The back page of the Daily Mail