The Whites were third in the Championship table but those losses have left them sixth, 12 points off the automatic promotion places.

"I do see a bit of self-doubt in the players. Ultimately it is my job and my staff's job to try and get that back."

Fulham were relegated from the Premier League in the summer and were among the pre-season favourites for promotion back to the top flight this season.

The Craven Cottage outfit won four games in a row in November to move up to third but were beaten by Bristol City, Preston North End and west London rivals Brentford in their past three games - and have now suffered seven defeats in 22 league games.

"If you lose three on the bounce of course you have concerns because a club like us, and what we want to do, you can't afford to lose matches," Parker added.

"I realise in this division you can lose games and go on these runs but ultimately we are trying to do everything we can to put that mini-blip behind us and try and win some games.

"When you are dealing in a league as volatile and competitive as this one, there are going to be blips."

'West Brom and Leeds are the best'

Parker took charge at Fulham as caretaker in February after Claudio Ranieri was sacked, and was then appointed as manager on a two-year deal in May.

He has called for patience as he tries to turn the club's fortunes around.

"Six months ago in the Premier League this club was a mess," he said.

"I realise we live in a world where these days you click your fingers and you normally get what you want.

"You can't just change things with a click of a finger. A lot of these players were here last year and were probably scarred by what happened.

"Over the course of time you can slowly change things - habits and mind-set - but you do need time and the players do as well."

However, Parker believes it will now be "tough" for the Whites to secure automatic promotion this season with them 12 points behind second place.

"There is no denying that West Brom and Leeds are the best two teams in this division," he said.

"They have been the most consistent quality-wise, and squad-wise they are good and mature.

"We need to try and get a bit of consistency, and if we put some together there is a slight chance. It is a tough one and let's see what happens."

Fulham have a chance to close the gap to the top two when they host Leeds on Saturday (15:00 GMT). 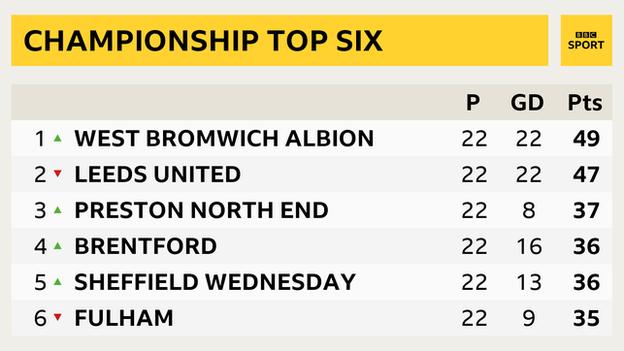