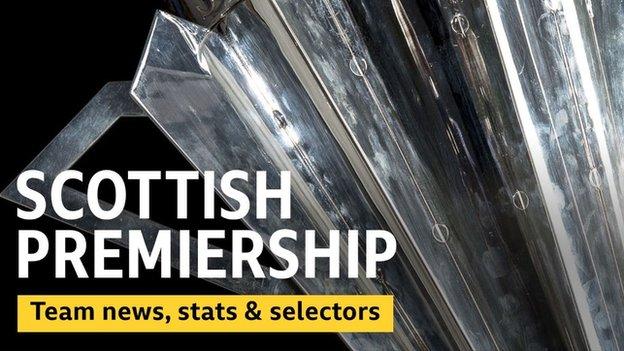 There's a key contest at the bottom among Saturday's five Scottish Premiership fixtures as Hamilton Academical and Hearts go head to head.

Only goal difference separates the struggling pair, with new Hearts manager Daniel Stendel seeking his first points in Lanarkshire in his third game in charge.

Elsewhere, champions Celtic are looking to stretch their lead at the top when they host Aberdeen, while managerless Kilmarnock have Alex Dyer taking the reins for the visit of Motherwell.

St Mirren aim for back-to-back away wins when they travel to St Johnstone, and Ross County take their illness-ravaged squad to Livingston.

Catch up with the team news and statistics and choose your team's preferred XI.

Celtic's Jonny Hayes is a doubt with a shoulder injury against his former club. Mikey Johnston returns from injury but fellow winger Mohamed Elyounoussi (foot) is struggling to make another appearance in 2019. Hatem Abd Elhamed (abductor) and Jozo Simunovic (knee) are still out alongside Daniel Arzani (knee).

Midfielder Craig Bryson and full-back Greg Leigh are doubtful for the visitors. Ethan Ross (thigh) and Scott Wright (knee) are still out.

Celtic manager Neil Lennon: "Aberdeen might change the way they play and in Sam Cosgrove they have one of the best goalscorers in the country, he is having a stellar season."

Aberdeen assistant manager Tony Docherty: "We don't go down there with any preconceptions that we are in the tunnel and we are already beat."

Did you know? Celtic have won 26 of their last 28 league games against Aberdeen at Celtic Park (D1 L1), although the only blemishes have come in the most recent three games.

Hearts are hopeful that Steven Naismith will return from a hamstring problem. Daniel Stendel will make a late decision on Jake Mulraney after he limped off against Celtic but Jamie Brandon drops out with an ankle injury. Christophe Berra is suspended while Uche Ikpeazu returns from a ban.

Hamilton manager Brian Rice: "I have to have the broad shoulders to take the heat off the boys."

Hearts manager Daniel Stendel: "The step to the Celtic game was good, but when we want to win points we need to also go forward and I think we can improve in this part."

Did you know? Hearts have only lost one of their last 12 league encounters with Hamilton (W7 D4), although they have failed to win both of the last two (D1 L1).

Pick your Heart of Midlothian XI

Kilmarnock interim manager Alex Dyer: "If the club turned round and said 'do you want the job?' then I will make a decision then but I will not be putting my name down and saying I want the job."

Motherwell manager Stephen Robinson: "Angelo Alessio's sacking at Kilmarnock scares the life out of me. There are sitting fifth in the table. You think 'what more do you have to do?'"

Did you know? No side has scored more Scottish Premiership goals from corners this season than Motherwell (seven), and no club has conceded more than Kilmarnock (four).

County are set to have a severely depleted squad after 10 players were struggling with a sickness bug on Thursday. Michael Gardyne (hamstring) drops out and midfielders Don Cowie (knee) and Iain Vigurs (foot) are working their way back to fitness.

Livingston manager Gary Holt: "It's part of the game. We have a few boys who were off this week, we have injuries as everyone knows."

Ross County co-manager Steven Ferguson: "The illness at the club this week is a huge disruption but it is outwith our hands."

Did you know? This will be only the second-ever Scottish Premiership meeting between the sides, after Livingston won 4-1 in Dingwall in August.

St Johnstone striker Chris Kane remains a doubt with a knock to his knee. Midfielder Jason Holt resumed full training on Friday after taking a knock late on at Hearts and is available.

St Mirren manager Jim Goodwin hopes to have two unnamed players back for the trip to Perth. Defenders Gary MacKenzie (hamstring), Kirk Broadfoot (foot) and Paul McGinn (hamstring) have missed recent games to leave Goodwin short at the back, while midfielders Sam Foley (hamstring) and Kyle McAllister (back) have also been absent.

St Johnstone manager Tommy Wright: "We have had two clean sheets in the last two games - hopefully that will continue."

St Mirren manager Jim Goodwin: "We will go there with a positive mindset, feeling good about ourselves on the back of the last couple of performances."

Did you know? St Johnstone have won six of their last seven home league games against St Mirren, including the last three in a row without conceding.