Hibernian will review CCTV footage to identify the culprit after a glass bottle was thrown at Rangers defender Borna Barisic at Easter Road on Friday.

Barisic was lying prone after a tackle that led to Ryan Porteous being sent off in Rangers' Scottish Premiership win when missiles landed near him.

Hibs installed a new security system in the summer after incidents last term.

"I can't get my head around why anyone would throw a glass bottle at another human," said head coach Jack Ross.

"I just don't get it. There are people who argue that behaviours on the pitch or around the pitch affect that. That's garbage. Someone who does that deserves the consequences that come with it."

Rangers manager Steven Gerrard said he was "pleased" with the behaviour of his players as "bottles, lighters, all kind of objects" landed on the pitch.

"We don't want to see that in any stadium. We want the players to be safe and we want the fans to be safe," he added.

A Hibs statement said they were "naturally disappointed at the actions of a few" and confirmed they would "review footage from all of the sections concerned to identify any individual involved".

In March, a glass bottle was aimed at Scott Sinclair from the same section of the main stand during the Scottish Cup quarter-final defeat against Celtic.

Then a Hibs fan was jailed for 100 days and banned from attending Scottish games for 10 years for confronting Rangers' James Tavernier during a league match between the sides in Leith last term.

Again, the culprit came from a similar area of the main stand.

'It could kill someone' - reaction

What's going through your head when you think that's OK? If that hits a player at the wrong angle or the wrong way, then it could actually kill someone. Was that not the same section that it happened in last time? If there is a certain element of bad fans, then they will be found.

If someone throws a bottle on to the pitch it's not a question of football bans, it's a question of the police getting involved. If that hits a player, it's going to do a lot of damage. So the police have to get involved if that's the case. Hibs thought they had dealt with this last season. 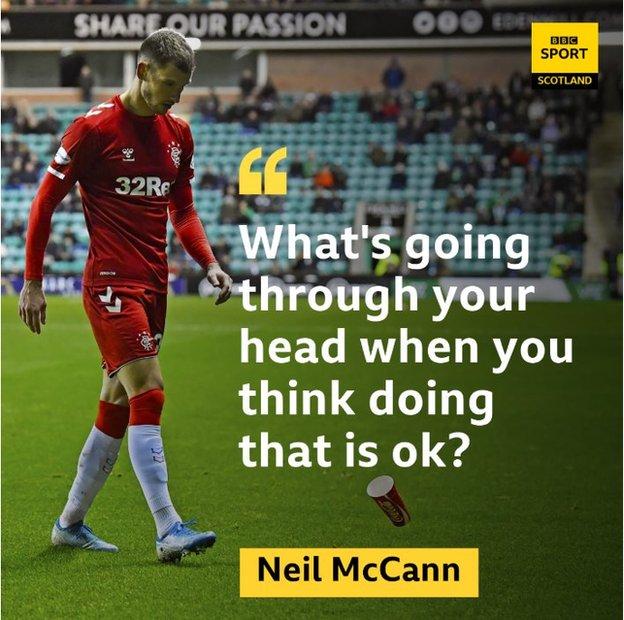