West Ham's miserable home record continued as defeat by a much-changed Leicester side left them stuck in a Premier League relegation battle.

Boos from the Hammers fans greeted the final whistle at London Stadium as Manuel Pellegrini's side racked up a fourth straight home defeat, with the veteran Chilean manager paying the price by being sacked less than two hours after the final whistle.

Second-placed Leicester, who made nine changes from the Boxing Day defeat by Liverpool, had a measure of control throughout and deservedly won through Demarai Gray's composed second-half finish.

West Ham levelled through Pablo Fornals' precise finish on the cusp of half-time, but they could not build on that in the second half.

Instead it was Leicester who were the more composed, illustrated by the slick move and finish by Gray which consolidated second place ahead of Manchester City.

The Foxes are four clear of City, who have a game in hand, but trail runaway leaders Liverpool, who have played two games fewer, by 10 points.

West Ham remain fourth bottom, a point clear of the relegation zone, although they have played one game fewer than their rivals at the bottom because of Liverpool's triumphant involvement in the recent Club World Cup.

Having failed to win any of their five previous home matches, Hammers boss Pellegrini demanded an improvement in his side's results at London Stadium.

Yet they produced another tepid performance in front of their own fans, lacking leadership, organisation and fight as they failed to win at home for the sixth game in a row.

And that run of four consecutive home league defeats has equalled the club's Premier League record, set from November 2005 to January 2006 at Upton Park.

Pellegrini's future was already under scrutiny, with the reaction at the final whistle from those left in the sparsely-filled stands clearly illustrating what they thought of the performance.

The Chilean's decision to replace striker Sebastien Haller with Michail Antonio, instead of pairing them together in a more attacking move, was also greeted with jeers and left Pellegrini in little doubt that the patience of the Hammers fans is wearing thin.

West Ham stand-in captain Declan Rice, speaking after the game, said the frustration of the squad was "10 out of 10", the England midfielder blaming a lack of confidence for his side's slide from fifth in the table at the end of September to the cusp of the bottom three.

"People were talking about us being top six contenders and now we're so far away," said the 20-year-old.

"Fans are coming to the game pretty much not wanting to come. We need to pick up fast."

Leicester show their strength in depth

Although bruising defeats by Manchester City and Liverpool have seemingly ended Leicester's title challenge, the Foxes are a strong bet to finish in the top four and earn a return to the Champions League next season.

Most pleasing for manager Brendan Rodgers was how the decision to make sweeping changes paid off.

Rodgers had been clear that he would rest players in the middle of a hectic Christmas period of four league matches in 12 days, with the likes of striker Jamie Vardy - who stayed at home after his wife Rebekah gave birth - midfielder James Maddison and right-back Ricardo Pereira all left out.

In truth it mattered little as the Foxes swept aside the Hammers to end a run of three games without a win.

The visitors played with an air of confidence missing from their opponents as they shaded possession, creating a number of good opportunities as the pace and movement of Gray, Perez and Iheanacho constantly caused problems.

The only downside was their inability to make more of the chances they created.

"The players that came in were absolutely fantastic, we were very good in moments in the game," Rodgers said.

"The boys were fantastic in that mentality and spirit.

"At this level you have to be on the edge and that's how we play, we have to have that edge and in order to have that today, away from home, we needed energy.

"The players that came in have been training brilliantly and they got their rewards today."

The Hammers celebrated the life of one of their finest players, who also starred in England's 1966 World Cup victory, with a minute's applause and a video montage of his finest moments.

Former Hammers team-mate Sir Geoff Hurst was close to tears after celebrating Peters' life in a speech, before carrying a floral tribute replicating Peters' shirt out to the centre spot alongside Peters' daughter Leeann.

Both sets of players led the minute's applause at an emotional London Stadium where fans also sang Peters' name, but the home side could not go on to earn a fitting result in his honour. 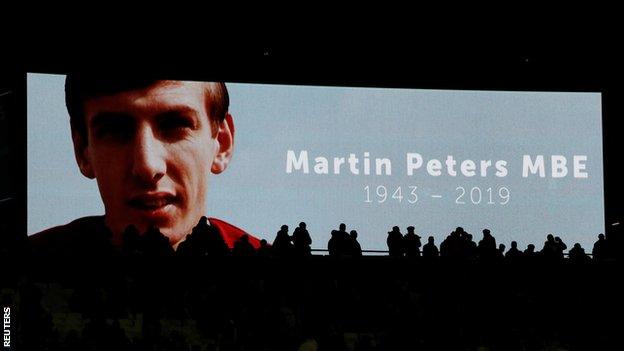 Leicester love playing away - the stats

The Hammers have another huge home game when they host Bournemouth, who are one place and one point above them, at 17:30 GMT.

Leicester again go on the road, travelling up to Newcastle for a 15:00 kick-off.