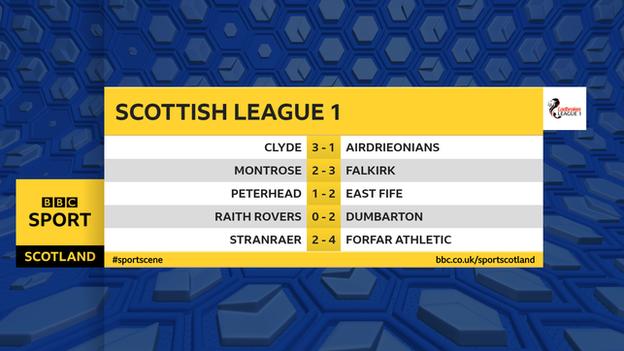 Scottish League One leaders Raith Rovers stayed top despite slumping to a shock 2-0 defeat at home to Dumbarton.

Airdrieonians missed the chance to climb above Rovers after they crashed 3-1 at Clyde.

East Fife displaced Airdrie in second place after a 2-1 win away to Peterhead.

Rock-bottom Stranraer lost the basement battle against Forfar 4-2, while Aidan Connolly scored a stoppage-time winner as Falkirk won 3-2 at Montrose.

Five minutes before half-time, Dumbarton were two ahead, with Ryan McGeever burying a header from Joe McKee's free-kick.

It proved to be enough to claim victory over the league leaders, but Airdrieonians failed to capitalise - they were behind after only six minutes against Clyde.

Alex Petkov rose highest to nod home a cross from Mark Lamont and in the 21st minute David Goodwillie made it two.

The Diamonds pulled one back before the interval when Dale Carrick scored from Leon McCann's corner, but Goodwillie sealed a surprise win with his 18th goal of the season at the death.

Goals from Danny Denholm and Scott Agnew gave East Fife the lead against Peterhead, who pulled one back through Scott Brown.

It means East Fife move into second and are one of three teams on 32 points at the summit alongside leaders Raith and third-placed Airdrieonians.

Falkirk are just behind on 31 points after Connolly scored a stoppage-time winner to give them a 3-2 victory at Montrose.

It was a battle at the bottom between Stranraer and Forfar. The visitors went ahead after 16 minutes through Mark Docherty's free-kick and Dale Hilson doubled the advantage in the 34th minute.

Robert Jones pulled one back for the hosts but two minutes later Forfar restored their two-goal cushion through Ross Forbes.

Sean Burns made it 4-1 before Jones grabbed his second of the afternoon with seven minutes left.