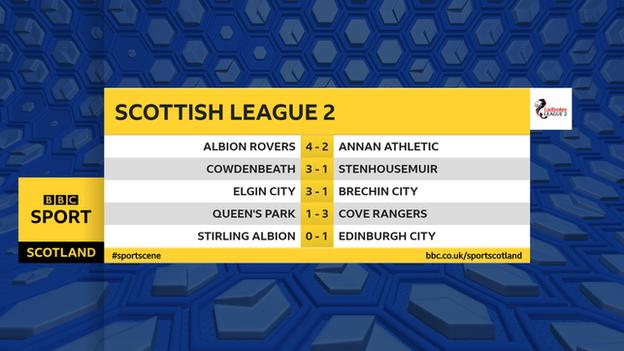 Cove Rangers remain two points clear at the top of Scottish League Two after a 3-1 victory at Queen's Park.

Second-placed Edinburgh snatched a 1-0 win at Stirling Albion thanks to a stoppage-time goal from Allan Smith.

Brechin City continue to prop up the standings after going down 3-1 at Elgin City, while third-placed Cowdenbeath were 3-1 winners over Stenhousemuir.

In Saturday's other match, Albion Rovers beat Annan Athletic 4-2 to haul themselves up to seventh.

At Hampden, Mitchell Megginson and Jamie Masson struck in quick succession midway through the first half to put leaders Cove Rangers in charge.

Salim Kouider-Aissa pulled a goal back for Queen's Park in the second half, but Cove netted a late third through Megginson to clinch victory.

Their lead at the top could have been four points but for Smith's late goal for Edinburgh City away to Stirling Albion.

The forward's fifth goal of the season proved enough to overcome a stubborn Stirling side that now sit just three points off bottom spot.

Cowdenbeath, in third, remain nine points behind Edinburgh after a 3-1 home win over Stenhousemuir.

Michael Herd's early opener for the Blue Brazil was quickly cancelled out by Connor McBride but Harvey Swann made it 2-1 before the break and Jordan Allan wrapped things up late on.

Kane Hester, a Shane Sutherland penalty, and Daniel MacKay all struck for Elgin City as they beat bottom club Brechin City. Matthew Knox netted a consolation from the spot.

Albion Rovers looked in control after taking a 4-0 lead against Annan Athletic through a brace from Declan Byrne - one of which came from the penalty spot - either side of goals from Daniel Scally and Ouzy See.

But Annan made them sweat after pulling goals back through Jamie Ballantyne and Christian Nade. 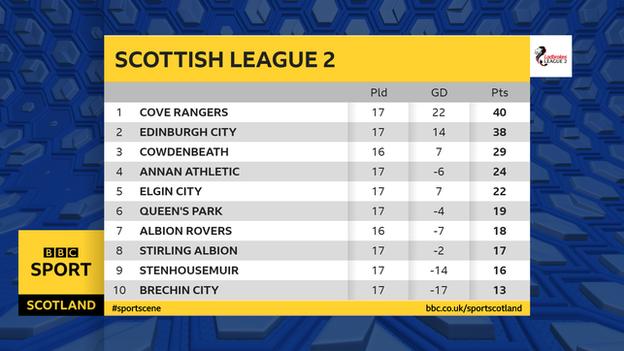