Chelsea will beat Manchester United and Liverpool to the signing of England winger Jadon Sancho, 19, because they are willing to meet Borussia Dortmund's £120m asking price. (Sun on Sunday)

Mikel Arteta agreed to become Arsenal head coach after failing to get assurances from Manchester City that he would be Pep Guardiola's successor as manager at Etihad Stadium. (Sunday Mirror)

Spurs also want to bring in French defender Issa Diop, 22, who is valued at £50m by West Ham United.(Sky Sports)

Raiola also represents United midfielder Paul Pogba, 26, and has been told by Real Madrid that they will not be making a bid to sign the France international in January. (Marca)

Tottenham's 27-year-old Denmark midfielder Christian Eriksen is set to turn down a move to Manchester United in January, despite being out of contract in the summer. (Daily Star Sunday)

Chelsea have agreed a deal to sign Norway Under-17 forward Bryan Fiabema from Tromso and the 16-year-old will go into the academy at Stamford Bridge. (Metro)

Liverpool and Netherlands centre-back Virgil van Dijk, 28, says he was "slightly disappointed" to miss out on the Ballon d'Or to Barcelona's 32-year-old forward Lionel Messi - but he added that he has the respect of the Argentine international. (Sunday Mirror) 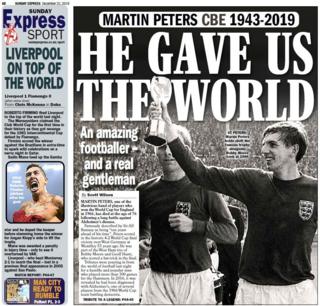