Saturday ended up being a perfect night all round for Liverpool.

The Reds became world champions for the first time, securing the only title the club was missing and injecting even more confidence into a squad of players getting used to winning trophy after trophy.

And they then walked off the pitch in Qatar after winning the Club World Cup to find out that - more than 3,000 miles away - their closest rivals in the Premier League title race had lost.

Yes, Manchester City made up some ground on Jurgen Klopp's side by beating Leicester City, but Liverpool have retained their 10-point cushion without kicking a ball in that competition - and they now have a game in hand on both the teams who are just below them too.

I don't think they could really have asked for much more from their week away.

Liverpool head for the King Power Stadium next, and they know that if they beat the Foxes there on 26 December, they will take a huge step towards the Premier League title.

'You cannot buy fear factor, but you can build it'

This latest success will have given them massive confidence to go and get three more points, and it also means they will not be feeling the effects of extra time against Flamengo.

As a player, you never feel tired when you have just won a cup.

In fact, far from feeling fatigued, Liverpool will be on a massive high and just looking forward to playing their next game - especially one as big as this.

If you look at the league table, then you would say a draw would be a decent result for them on Thursday - but this Liverpool team does not think like that. 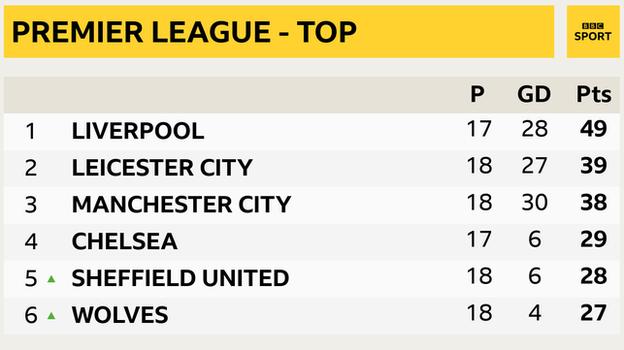 We have seen time and again, by the way they play, that they want to win every game and they are just so hard to overcome.

To have only dropped two points by Christmas is just phenomenal, and everyone knows it.

There is a fear now of Liverpool, and especially of their second-half displays. Teams know that if they do not take their chances against them, then they are going to come back and punish you - as late as it takes.

The number of injury-time winners they have had in 2019 - Roberto Firmino's goal to sink Monterrey in the semi-finals of the Club World Cup was their sixth this year - will play on the opposition's minds too.

In that way, they remind me of Manchester United teams of old, who would almost beat you in tunnel before the game kicked off. Psychologically, that is a huge advantage.

It is all part of the aura really great teams have. I've played against sides who have it, and even if you go a goal up, you are thinking they will come back and wondering how you can hold on.

You cannot buy that fear, you can only build it - by doing the same thing over and over again, like Liverpool have done.

It is the same with the self-belief the Reds have clearly got right now. It is the biggest thing any team can have, but instilling it in your players is the hardest thing.

Of course, Liverpool players were already full of confidence after their successes over the past few months - but they are going to have even more now they can say they are world champions.

'Reds went to Qatar to win, and they did'

Winning the Club World Cup was the only thing that mattered to Liverpool in Doha.

To be part of the first Liverpool team to win that competition was a huge incentive for Klopp and his players, and they were absolutely desperate to do it.

I know exactly how they felt, because it was the same for me when I was part of the Reds side beaten in the 2005 final.

I wanted that achievement for myself - to be on that list of Liverpool players that had won something the club never had before.

I understand why Klopp wanted it so badly too, because our manager Rafa Benitez was the same.

You can play it down as much as you like from the outside, but it was an important competition for the club - and they showed that by the way they approached it.

If it didn't matter, Klopp could have left half his squad in England to try to beat Aston Villa and reach the semi-finals of the Carabao Cup.

He didn't do that. Instead, he took his strongest possible squad to Doha.

It also gave them a rest mentally, allowing them to focus on something other than the Premier League for a week. The trip will have done a lot for team bonding too.

But ultimately they were there to bring the trophy home, and they have done that.

Klopp talked this week about changing the perception of the Club World Cup in England so it is seen as a significant title and not a distraction, and he has proved he meant it.

Look at his team selection for the final, when he picked the strongest XI he could.

The players did the same, with their performances in both matches and the desire they showed to keep winning and land another trophy.

What next? 'There is more silverware to come'

There is another reason winning the Club World Cup was important: the commercial impact it will have on the club.

I know for fans it is what happens on the pitch that counts, but a success like this is huge from a financial point of view too.

Like it or not, football clubs have become businesses, and for Liverpool to be world champions pushes them into new markets for sponsorship.

The money that will bring in means the Reds can keep building, by rewarding the players who have won these trophies and buying new ones to try to win more.

I know the Carabao Cup has fallen by the wayside because of the focus on Qatar - but for all of those reasons, it was the right choice to try to win this tournament over that one.

What next? Well, there is plenty more silverware to come for this team, I am sure. Winning the Champions League in June has elevated them to a new level - and they are showing it was just the start.

We first saw the mentality of these players from the way they reacted to losing the 2018 Champions League final. You only have to look at what has happened to Tottenham so far this season to see how tough that is to take.

Liverpool then had to deal with coming so close to winning the Premier League just a couple weeks before their second successive European final - again, there was no hangover, and obviously this time they won.

But what they have done in the league so far this season really shows what the whole club is about. They are relentless, and you cannot break this team down.

It was Klopp who brought in that mindset - but it is the German's ability to sustain, develop and progress it that makes this such an exciting time.

Like their song about conquering Europe goes, Liverpool are not going to stop.