Manchester United and a number of Bundesliga clubs have targeted Birmingham City and England youth midfielder Jude Bellingham, 16, after this first-team breakthrough. (Telegraph)

West Ham target Gabriel Barbosa refused to discuss his future after Flamengo's Club World Cup final defeat by Liverpool. The 23-year-old Brazil forward is on loan in his homeland from Inter Milan. (Goal)

Everton have promised new manager Carlo Ancelotti he will have money to spend in January as the Italian prepares to begin work at Goodison Park. (Star)

The Premier League's iconic player of the decade

Who is your iconic player of the decade in English football?

Swedish forward Zlatan Ibrahimovic would add "determination and character" to AC Milan, says boss Stefano Pioli, but a deal for the free agent is yet to be agreed. (DAZN, via Goal)

Schalke goalkeeper and captain Alexander Nubel will leave the club at the end of the season with the 23-year-old wanted by some of Europe's top clubs. (Mail)

Juventus' former Croatia striker Mario Mandzukic, 33, has arrived in Qatar before a move to Al-Duhail, having previously been a target for Manchester United. (Sky Italia)

Promising Norwegian striker Bryan Fiabema is set to join Chelsea from Tromso after the 16-year-old impressed on trial. (Star)

Real Madrid manager Zinedine Zidane says the La Liga side are not in the market for a striker in January. (Goal) 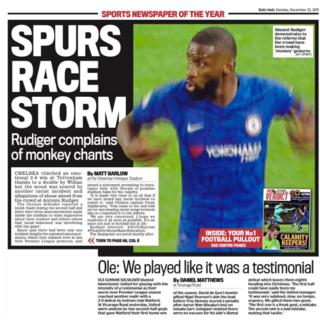