Watch highlights of Leicester City v Liverpool on Match of the Day at 22:20 GMT on Thursday, 26 December on BBC One and the BBC Sport website.

It is pretty much win or bust for Leicester's title hopes when they host leaders Liverpool on Thursday.

After the Foxes lost to Manchester City on Saturday, there is really only one result that would make things interesting at the top of the table.

If Brendan Rodgers' side can bounce back and become the first team to beat the Reds in the Premier League since 3 January, it will give them a massive psychological boost and restore their belief that they are genuine title contenders.

Leicester's result at Etihad Stadium was always going to play a huge part in their approach to this game - and now they need to win it, because nothing less will do. 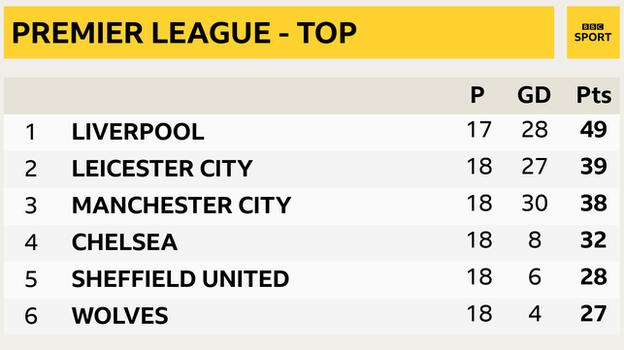 It seems very early to be saying this, because we are only just approaching the halfway point in terms of games played, but it feels like a really pivotal moment in the season.

At the moment, Liverpool are in total control of the title race, even after their trip to Qatar last week for the Club World Cup.

But if Jurgen Klopp's side have their unbeaten run ended by the team who are closest to them, that would take them out of their comfort zone and give their next few weeks a very different dynamic.

Fresher Foxes to go on the attack?

The Foxes know this is their big chance to close the gap, which is why I am expecting them to really take the game to Liverpool.

Leicester will believe they are fresher after the travelling Liverpool have done in the past few days, and seeing the Reds play extra-time in the Club World Cup final.

They can try to make the most of that with a high tempo and aggressive attacking approach.

The home side's flexibility is going to be an asset for them here, because they have the ability to use different formations depending on where Rodgers thinks they can get at the Reds.

Their tried and tested shape is a 4-1-4-1, which is what they used when they went to Anfield earlier in the season and were only beaten by James Milner's 95th-minute penalty.

They were unlucky to lose that day, and had plenty of possession - 49.3% - but they did not create many chances. James Maddison's goal came from their only shot on target. They only had one other effort at goal, while Liverpool had 18 in total.

Leicester are at home this time and, given the circumstances, I am expecting them to pose far more of a threat. They have to. The question is how?

Rodgers switched to a 4-4-2 diamond for his side's win over Aston Villa at the start of December, and that is one option for him again here.

Using a diamond against Liverpool would be a challenge, however. As I mentioned in this piece after the Villa game, that system leaves the opposition full-backs free to overload you down the flanks.

With respect to Villa, it is one thing to do it successfully against them; it is another for Leicester to try it against a team with two of the best full-backs on the planet.

The attacking threat and crossing ability of Trent Alexander-Arnold and Andy Robertson are among Liverpool's biggest strengths, and encouraging them forward would be a big risk.

So, maybe Rodgers will try something slightly different this time. I am surprised that, so far, no-one else has tried to replicate what Manchester United did when they held Liverpool at Old Trafford in October. It is something Leicester are capable of with the players they have.

United went with three centre-backs that day, to go man-for-man with the three Liverpool forwards. They also sent their wing-backs forward to push back Liverpool's full-backs, and used a pair of fast split strikers who played high and wide.

It worked, because United were able to hurt Liverpool on the transition by getting the ball forward quickly, and turning their defence. So far, they are the only team to take a point off the Reds this season.

Can Leicester do the same, as they go for the win? Well, we have seen them play with three at the back before, in the second half of their fightback to beat Everton on 1 December, and that switch also saw them play with two strikers.

If they do the same on Thursday, they could use Jamie Vardy and Kelechi Iheanacho in the same way Marcus Rashford and Daniel James were so effective for United - to exploit the spaces left behind the Liverpool full-backs, and isolate their centre-backs.

An all-English battle one of many individual duels

While Leicester are quite fluid tactically, we usually know what we are going to get from Liverpool. Their shape and style is pretty much set.

Different players come in and out of the team but they don't really change the way they play, or their 4-3-3 formation.

When you are as successful as they are, then you believe in what you do. They don't worry too much about where the opposition's strengths lie because they know that, if they perform well, they will win.

Of course injuries will affect them, though, and I just wonder how they will cope without Fabinho against the Foxes.

Whatever shape Leicester play in, they will be trying to get Maddison on the ball, high up the pitch, and the Brazilian would usually have been the man directly trying to stop him in those areas.

With Fabinho out injured, Liverpool do not have an out-and-out holding midfielder to protect their back four.

Georgino Wijnaldum has played there too but he has missed their Club World Cup games with a hamstring problem, so Jordan Henderson is most likely to fill in again, like he did against Flamengo at the weekend.

Henderson versus Maddison would be a really interesting all-English battle, but I think there will be several similar individual duels going on all over the pitch.

Both sets of full-backs are going to have to find the right balance between attack and defence, while Vardy's contest with Virgil van Dijk will be fascinating, and so will seeing how Leicester try to cope with the Liverpool front three.

We know Roberto Firmino likes to drop deeper to get on the ball and link play - but will it be Wilfred Ndidi's job to track him, or will one of the Leicester centre-halves take responsibility?

It is going to be a very tight game and it is incredibly difficult to call. One moment could decide it, like it did when these sides met at Anfield in October.

Liverpool have come through every challenge they have faced in the Premier League so far this season and, with the title in their sights, they will believe they can pass this test too.

It will be a tough evening for them, though, and I am sure they are well aware of that already. Put it this way: I think they would be happy to escape unscathed, with a draw.