Barcelona are already planning for next season and want to bring Paris St-Germain and Brazil forward Neymar back to the club. (Mundo Deportivo - in Spanish)

RB Leipzig's head of football Oliver Mintzlaff has revealed they are struggling to compete with Manchester United in the race to sign Norway striker Erling Haaland from Red Bull Salzburg. (Mail)

Chelsea have been offered the chance to sign Isco, 27, in a £44m deal by Real Madrid, which would pave the way for the Spanish giants to make a move for Tottenham's 27-year-old midfielder Christian Eriksen. (Mirror)

Arsenal and Bosnia-Herzegovina defender Sead Kolasinac, 26, is a transfer target for Napoli and Roma. (Sky Sports)

Real Madrid have told Paul Pogba's agent Mino Raiola that they will not be signing the 26-year-old in January. (Mail)

Spurs are keen on Lille midfielder Boubakary Soumare. The 20-year-old has also been considered by Manchester United. (L'Equipe - via Football 365)

Borussia Dortmund will not sanction the sale of England winger Jadon Sancho, 19, in January. (Bild)

Who is your iconic player of the decade in English football?

Fulham and Brentford are considering moving for Jack Clarke, 19, in January if Tottenham recall the winger from his loan spell at Leeds. (Mail)

Everton have been encouraged to sign Wolves and Mexico striker Raul Jimenez, 28, as well as Southampton front man Danny Ings, 27. (Talksport - via Star)

Forward Andy Carroll, 30, is set to earn a new-one year deal at Newcastle United with boss Steve Bruce impressed by the Englishman since his return. (Mirror)

A joke eBay sale of Stoke City has been pulled after bids for the club reached £65,000. (Stoke Sentinel) 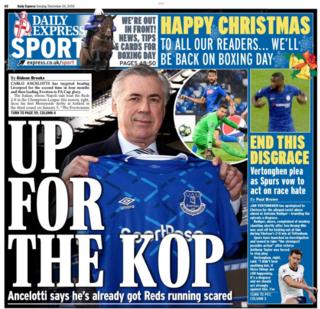 Back page of the Express