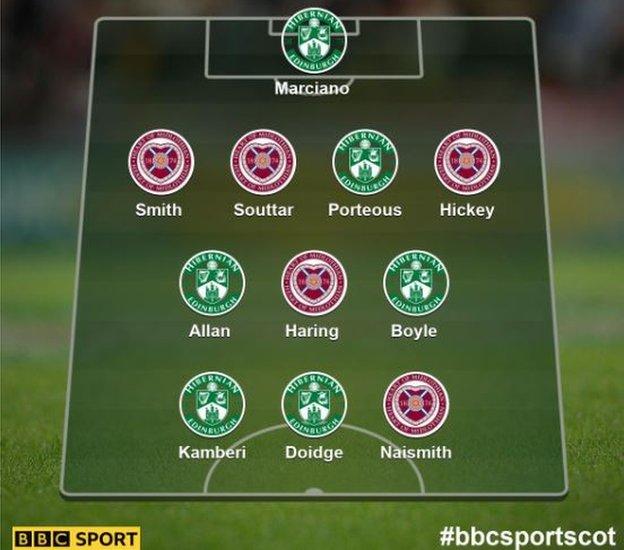 Six from Hibernian, five from Hearts, with Scott Allan's creativity in the Easter Road midfield leading the voting ahead of Thursday's Edinburgh derby.

That's the results of your our combined XI poll as the sides prepare to meet in the Scottish Premiership at Tynecastle.

Allan received twice as many votes as any other midfielder.

Hibs' Ofir Marciano is your overwhelming choice in goal, gathering 48% of the votes ahead of team-mate Adam Bogdan and Hearts' Joel Pereira.

Considering Hearts sit bottom of the Premiership, eyebrows might be raised that you have chosen three of their players in the back four of your preferred 4-3-3 formation.

However, it reflects the fact that seventh-placed Hibs have the second worst defensive record in the top flight - conceding two more goals than Thursday's hosts.

Hearts' Michael Smith edges out Hibs captain David Gray for the right-back spot, with Aaron Hickey getting the nod in a two-horse race with Lewis Stevenson on the left.

Ryan Porteous is the one Hibs player in the back four, just ahead of John Souttar, with fellow Hearts centre-half Craig Halkett just missing out.

Peter Haring sneaks into the midfield despite the Austrian having been a key absence for much of Hearts' season through injury.

Hibs winger Martin Boyle, who himself recently returned from injury, is also included in a very attacking line-up.

It was a close race for the striking positions, with Hibs' Florian Kamberi edging ahead of Hearts' Steven Naismith and team-mate Christian Doidge, but all three make your team.