Chelsea boss Frank Lampard says Brazilian winger Willian, 31, is in talks with the club about extending his contract, which runs out in the summer. (Mail)

What happened in the top flight on Boxing Day?

Bayer Leverkusen will block any attempt from Arsenal to try to sign German winger Kevin Volland, 27, from them. (Mail)

Manchester City winger Leroy Sane, 23, will stay at the club until the end of the season but the Germany international is expected to move to Bayern Munich in an £85m deal in the summer. (Star)

Dinamo Zagreb and Spain midfielder Dani Olmo, 21, has been linked to Manchester City and Manchester United and says he wants to take the "next step" in his career. (Manchester Evening News)

Arsenal midfielder Mohamed Elneny's father says the 27-year-old Egypt international, who is on loan at Besiktas, is in talks over a move to AC Milan. (Express)

Real Madrid forward Eden Hazard, 28, could be out until the end of January or start of February with the ankle injury the Belgium international suffered at the end of November. (Marca)

Real Madrid midfielder Martin Odegaard, who joined Real Sociedad on loan for two years in the summer, is set to be recalled by the Bernabeu club in June 2020. (AS) 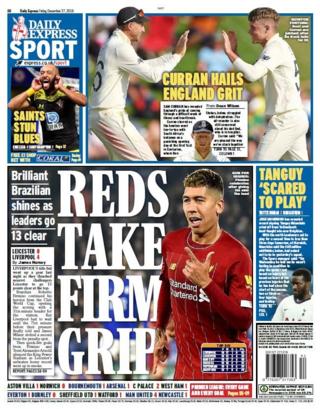