Frank Lampard was pleased to see the "real Callum Hudson-Odoi" score his first Premier League goal and has challenged the winger to match the high standards he set in the home win over Burnley.

The 19-year-old showed a nice bit of opportunism, stealing in to the box to finish off Cesar Azpilicueta's chipped ball, to net his side's third and seal a comfortable win after a Jorginho penalty and Tammy Abraham header had given them a 2-0 half-time lead.

Hudson-Odoi has admitted struggling to recapture his impressive form from last season because of fears he will suffer a recurrence of the Achilles injury he suffered in April.

But having played something of a bit-part role so far, he carried on his goalscoring form from last weekend's FA Cup third-round win over Nottingham Forest with another strike on Saturday.

"For Callum to score in the six-yard box is more exciting than him scoring from 30 yards without a doubt," said Lampard of Hudson-Odoi, who signed a five-year contract in July.

"It means he is willing to get in there. It wasn't the only time he did that. His overall performance was a statement of what he has to do.

"That was the real Callum. If he carries on like that we will have a real player."

Chelsea given helping hand, but deserve the win 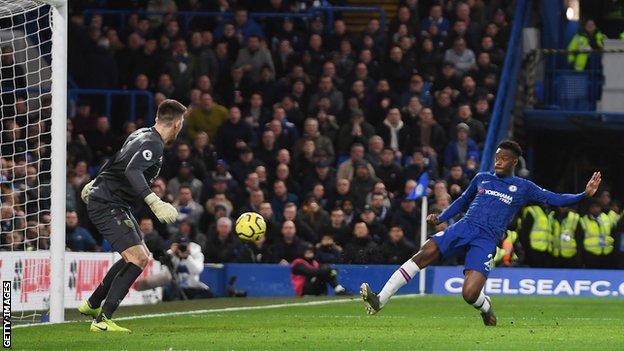 The Blues have faltered at the Bridge in recent weeks, losing to three sides near the relegation zone, as part of a run of five defeats in nine games.

They initially struggled to break down a well-organised Burnley in the opening 25 minutes until Matt Lowton's reckless sliding tackle on Willian enabled Jorginho to open the scoring from the penalty spot.

Visiting keeper Nick Pope then allowed Tammy Abraham's close-range header to evade his grasp and find the net to give the Blues a grip on the game before they had even got out of second gear.

The Blues could have had more but three was plenty against a Clarets side who rarely threatened, coming closest to a goal through a Ben Mee header that Ross Barkley hacked off the line.

Already assured of being fourth in the league regardless of Saturday's result, Chelsea's win ensures they preserve a five-point cushion between themselves and Manchester United, who lead the pack below them chasing Champions League qualification.

"It was just what we needed in terms of performance. We should have scored more but I can't complain because we scored in the first half. We've got nervous before when we've had a measure of possession but not scored," Lampard said.

"We were so positive from minute one. It's a big win and one we must pick up on and replicate. It's a nice example of the standard we have set.

"It feels nice to smile in a game and enjoy what you are watching."

As the saying goes, goals change games, and the two Chelsea scored here in the first half are firm evidence as to the truth of this.

For 25 minutes, the Blues looked like a side who have suffered at home at the hands of defensive-minded opponents.

West Ham, Bournemouth and Southampton - sides then with form and league position not dissimilar to Burnley - have all been to west London and left with a clean sheet and three unexpected points.

Despite adding the inventive Ross Barkley to a midfield three already containing Mason Mount they lacked the incisiveness and crispness of passing required to open up a well-drilled Clarets.

But they were given a foothold in the game - one from which their victory was built - through Lowton's ill-advised sliding challenge on Willian in the box.

The Brazilian showed an element of canniness, ensuring contact to maximise the ugliness of the challenge, but such recklessness is rarely tolerated.

Pope's offence was greater. He is a talented keeper, but flapped at Abraham's downward header, failing to make contact with the ball as it sped past him and in.

That left 50 minutes for the Clarets to play with defeat almost inevitable.

Hudson-Odoi made sure of that with his neat finish almost immediately after the break, allowing Chelsea to cruise.

Burnley's season has been a repeated case of one step forward, two steps back. Three times they have put together encouraging back-to-back results, only to then lose successive games.

The result at Stamford Bridge - their fourth defeat on the spin - represents a new low for the campaign, maybe not in terms of performance but certainly as regards form and league position.

There are mitigating circumstances, with manager Sean Dyche largely reliant on one consistent attacking threat in Chris Wood, because of injuries to Ashley Barnes and Jay Rodriguez.

He almost lost Wood too during this game, with damage to his nose in the first half requiring him to twice leave the field for treatment.

Dyche's attempted solution to his side's current dire run and a return of just five goals from nine games was to play Jeff Hendrick behind Wood as part of a five-man midfield.

It worked in the first quarter, but had too little dynamism and attacking instinct to turn the tide once the second goal went in.

"We've got no complaints about the result," said Dyche. "I know Chelsea have been a bit up and down here but I didn't think that was relevant. They are still a strong side.

"This is the Premier League. You come out of two wins and suddenly you lose four on the spin. It creeps up on you. We have to fight for everything. We have always had to do that.

"The confidence gets sucked out of players if they are not winning. We are trying to revive that."

To add to the Clarets' woes, some of their rivals at the bottom have shown a dramatic upturn in fortune. Watford's new manager bounce and Southampton's rejuvenation have blown the battle at the bottom wide open.

Even West Ham and Aston Villa have shown signs of life, the latter most significantly in their 2-1 win at Turf Moor on New Year's Day.

Considering that all seven of Burnley's wins this season have come against sides currently occupying a spot in the bottom half of the table, their next games against Leicester, Manchester United and Arsenal are an extremely daunting prospect.

Pick up some points from these fixtures and optimism will return. Lose all three and the pressure to get anything from subsequent encounters against Southampton, Bournemouth and Newcastle will be monumental.