Tottenham are in talks to sign Cape Verde striker Ze Luis, 28, on loan from Porto. (Record - in Portuguese)

Inter Milan have agreed personal terms with Danish midfielder Christian Eriksen, 27, over a permanent move this month but Tottenham want the Italian side to double their bid of 10m euros (£8.5m). (Calciomercato - in Italian)

Uruguay striker Edinson Cavani, 32, is out of contract in the summer but Paris St-Germain have told Atletico Madrid to raise their offer of 10m euros to 30m. (Marca - in Spanish)

Liverpool are lining up a summer move of £107m for Bayer Leverkusen midfielder Kai Havertz, and lead Manchester United, Barcelona and Bayern Munich in the race to sign the 20-year-old Germany international. (Mundo Deportivo, via Mirror)

Arsenal are looking at making a £6m move for PSG's French left-back Layvin Kurzawa, 27, before he becomes a free agent in the summer. (Sun)

Arsenal playmaker Mesut Ozil, 31, said he had a "hard time" under previous coach Unai Emery but the former German international is "happy with everything" under new boss Mikel Arteta. (Mirror)

The Gunners and local rivals Tottenham are among five Premier League clubs chasing Getafe centre-back Djene Dakonam. Monaco have already had a bid turned down for the 28-year-old Togo international. (Sun)

Spurs will face competition from Sevilla this month in a bid to land AC Milan's Polish striker Krzysztof Piatek, 24. (Mail)

Manchester United left-back Ashley Young, 34, believes Inter Milan will still want to sign him even if they sign Spinazzola. (Sun)

Manchester United want to sign a central midfielder on loan for the rest of the season and 24-year-old Spaniard Marcos Llorente, who plays for Atletico Madrid, has emerged as an option. (Manchester Evening News)

As the competition moves back to the winter, which Premier League players are likely to be affected?

Barcelona are close to signing Brazilian midfielder Matheus Fernandes, 21, from Palmeiras for 7m euros, plus a potential 4m in add-ons. (Mundo Deportivo - in Spanish)

AC Milan's Swiss full-back Ricardo Rodriguez, 27, has chosen to go out on loan to Fenerbahce rather than PSV Eindhoven, with a view to a permanent move for 6m euros. (Calciomercato - in Italian)

Southampton will not sell Che Adams this month as boss Ralph Hasenhuttl has ordered the board to keep the English striker, 23. (Express)

Former Chelsea and Tottenham manager Andre Villas-Boas has hinted he could leave Marseille after ex-West Ham and Sheffield Wednesday chief executive Paul Aldridge was appointed as a 'special advisor' without his knowledge. (Le Parisien - in French)

Rangers midfielder Greg Docherty, 23, would prefer to join Sunderland on loan for the remainder of the season rather than Charlton. (Northern Echo)

Uefa changed the formation of the fans' team of the year to accommodate 34-year-old Juventus and Portugal forward Cristiano Ronaldo. (Mail) 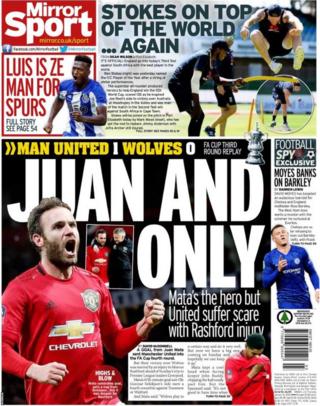 Read more on Commonwealth events to be held in India

Ospreys & Ulster games off over coronavirus

Read more on Ospreys & Ulster games off over coronavirus