Rangers pulled off an astonishing late comeback from 2-0 down to rescue their Europa League hopes with a dramatic victory over Braga at Ibrox.

The slick Portuguese were dominant and cruising in the last-32 first leg after goals from Fransergio and Abel Ruiz.

But Rangers hit back with an Ianis Hagi double either side of Joe Aribo's superb solo goal in a 15-minute flurry.

The Scottish side, though, will be without suspended top scorer Alfredo Morelos in Wednesday's second leg.

The Colombian's first-half booking earned him a ban that could prove costly next week, but there was only jubilation at full-time after a famous and improbable fightback that will live long in the memory.

Rangers had already defeated Portuguese opposition at Ibrox this season, their 2-0 victory over Porto helping to secure progress as group runners-up. Braga may not have the same lustre, but they quickly proved they can play as they sought to extending their unbeaten run in Europe to 14 matches.

On a soggy, threadbare surface, Rangers were bogged down and played off the park for much of the first hour by the quick-passing visitors.

Braga clearly hadn't come to sit back. Deploying a risky high defensive line, they attacked with incisive intent and when the opener arrived just 11 minutes in, it was already overdue.

The warning signs had been there from the outset. Raul Silva was picked out by a Sequeira free-kick only to head straight at Allan McGregor, with Braga having two bites at the rebound but failing to convert.

Mercurial forward Francisco Trincao - who has agreed a £26m move to Barcelona this summer - then flashed a shot inches wide before Fransergio made his side's dominance count. The Brazilian midfielder strode forward, shrugged off Scott Arfield's attempted challenge and thudded a swerving 25-yard drive in off the crossbar.

Rangers were careless in possession and inviting pressure. Gradually, though, they recovered from the sticky start and began to fashion a threat.

Morelos - the tournament's top scorer - looked set to add to his tally as Gerrard's side found some joy from popping passes into space behind the Braga defence.

Morelos broke clear, but goalkeeper Matheus stayed tall and stuck out a boot to save. The Brazilian repeated the trick soon after from an acute angle when Morelos latched on to a perfectly weighted Hagi through ball.

Braga remained a danger, however, and Paulinho looped a far-post header too high before Trincao curled a shot through Borna Barisic's legs and just past the post.

There was no real indication of the tide turning as the second half began with Braga again in the ascendancy. Glen Kamara's misplaced header put Joao Palhinha in on goal, with the striker's heavy touch getting the hosts off the hook.

A miscued Morelos cross from the right flank then deceived Matheus and almost ended up in the top corner. But another Rangers error nearly doubled their deficit as possession was coughed up cheaply and Fransergio rattled the bar from outside the box.

By now the boos were ringing out at Ibrox and when Morelos couldn't convert from three yards, with Matheus somehow making a smothering save, it seemed it wouldn't be Rangers' night. Especially when Braga doubled their lead with a well-worked move. Ruiz, on loan from Barcelona, marked his debut with the finishing touch as he lashed the ball into the bottom corner.

It almost became 3-0 when a Braga counter-attack sent Palhinha clear again and McGregor came to the rescue with a timely block. The importance of that save soon became apparent as Hagi gave the home side a lifeline when he cut inside from the right flank and powered a left-foot shot in off the post.

Suddenly, Ibrox was jolted back to life. Substitute Aribo then had the place rocking to the rafters with a goal of wonderful skill, dancing past four challenges before calming slotting past Matheus.

Fittingly, the final say belonged to Hagi, who had done more than most to haul his side out of their stupor. The Romanian's free-kick from 25 yards took a deflection off the wall and dropped just inside the post. Cue bedlam.

Rangers still have work to do, especially without Morelos next week, but their prospects are now looking much healthier. 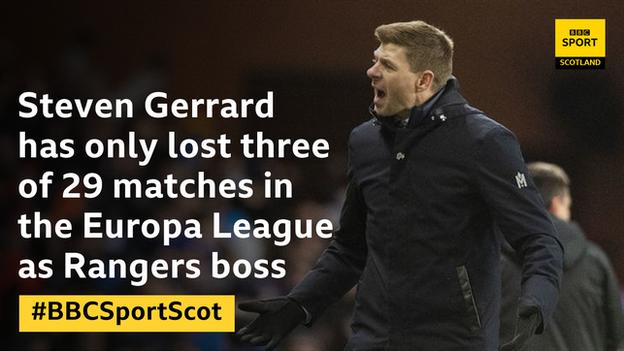