Ten-man Motherwell climb back to third in the Scottish Premiership after a goalless draw with Hamilton Academical.

Brian Rice's side failed to capitalise on their man advantage after Motherwell striker Christopher Long was shown two yellow cards inside six minutes towards the end of the first half.

The draw means Hamilton stay in 11th, just two points above bottom side Hearts having played a game more.

And Aberdeen's defeat means Motherwell edge back above them.

Given Motherwell came into this game without a win in six and had lost just once in their previous eight trips to Hamilton, victory would have been the target.

But after Long's cheap sending off and Ross County's late win at Aberdeen, Stephen Robinson will likely now consider this a good day's work.

Hamilton, too, were struggling for form and were without a victory in seven. The first half reflected that.

Barring an early Marios Ogkmpoe one-on-one which was well saved by Mark Gillespie, clear openings were scarce until Hamilton's David Moyo diverted a header wide towards the end of the first period.

In between those Hamilton efforts, Motherwell created some half chances of their own, but they suffered a huge blow as they lost their joint top scorer Long.

The former Everton man was shown a yellow card for kicking the ball away just after the half hour mark, and six minutes later he was sent off after catching David Templeton with a late trip. 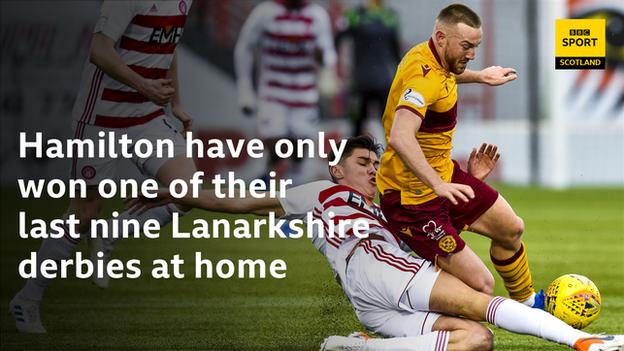 Robinson's side faced a huge uphill task if they were to take anything from the game. However, a second-half change of shape to a 4-3-2 helped nullify the Hamilton attack while posing a threat themselves.

Clear-cut chances remained at a premium as conditions had a negative affect on the match, with Templeton trying his luck from distance on a couple of occasions before Hamilton's best chance of the half.

Scott Martin broke through towards the Motherwell goal, but his right-footed effort was dragged just wide with Gillespie rooted.

As the match went from end-to-end in the closing stages, the hosts had two chances to turn a valuable point into three as Liam Polworth had a close-range effort saved by Luke Southwood, and substitute Jermain Hylton lashed a volley from inside the box over the bar.

Robinson, though, will likely be content given his side return to third having played a game fewer.

As for Hamilton, this will feel like an opportunity missed in their quest for survival. Combined with the loss of a two-goal lead in drawing with Hearts at Tynecastle last weekend, Rice may feel his side have dropped four points in the past week.

Man of the match - David Templeton

Both sets of players deserve credit for overcoming the blustery wintery conditions. David Templeton with his intricate skills caught the eye, creating a number of shooting opportunities. While he was top man, he like the others failed to find the killer touch in front of goal.

'The point is massive for us' - reaction

Hamilton Academical head coach Brian Rice: "I thought we dominated the match. We had a lot of the ball, it was just the final bit that was missing. We didn't work the goalkeeper enough in the second half. I think we should have won the match."

Motherwell manager Stephen Robinson: "I'm extremely proud of the players to go down to 10 men so early and put in a performance like that. I thought we had the three best chances of the game. The point is massive for us today with the other results."