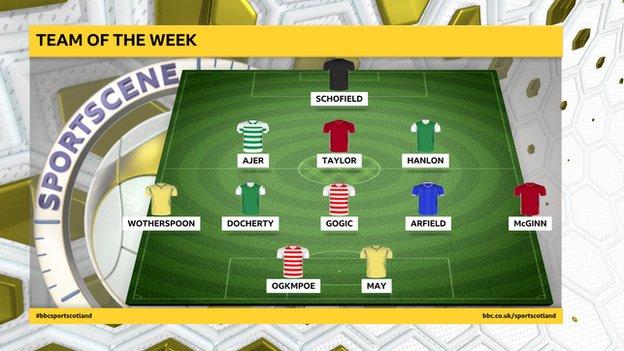 Storm Dennis battered the country this weekend but five fixtures still managed to offer plenty of drama in the Scottish Premiership.

While Motherwell and St Mirren will need to go again in the league on another date, this round of fixtures witnessed Celtic and Rangers edging out victories while Hearts' plight continues to be a concern.

Here are the top takeaways from the weekend's action...

Neil Lennon has had little to be worried about in 2020 as his side has made what appears to be a strong case for a ninth consecutive league title.

Sunday's 2-1 win away to Aberdeen was an important one against a side that have taken points from second-place Rangers twice this season - especially since Celtic were far from their best over the 90 minutes.

But what will worry Lennon will be how his defence struggled in the north east and, had Aberdeen been more clinical, it could have been a very different result. Now, with a trip to Copenhagen in the last 32 of the Europa League up next, the champions have concerns over what their back four - or three - will be.

Nir Bitton started in the Granite City in place of centre-half Jozo Simunovic, who missed out through injury. Left-back Greg Taylor hobbled off and his replacement, Jonny Hayes, had one of his poorer games. Hatem Abd Elhamed has returned to training but hasn't played since November.

On the face of it, this result was not the emphatic response Steven Gerrard craved on the back of a midweek defeat to Kilmarnock.

In truth, the Ibrox side controlled large parts of the 1-0 victory over Livingston, even though there was the odd scare with Allan McGregor and his post called into action.

The brightest light in a Rangers jersey was the match winner, Scott Arfield. His second-half strike was the Canada midfielder's ninth goal this term, and fourth in three games. Gerrard will be looking for his influence to continue against a stern Braga test on Thursday night.

McInnes has big call to make

In what has been a testing start to 2020 for Aberdeen, their improvement continued in a fine performance against Celtic, with the 2-1 defeat not reflecting their efforts.

However, the three goals scored in midweek against Hamilton Academical appeared to be a one-off as the home side again struggled in front of goal. They were unable to add to Ash Taylor's goal despite bombarding the Celtic box for much of the contest. Aberdeen have only scored more than once three times in their last 14 games.

Curtis Main kept his place in the side and was a nuisance but offered little goal threat. Fellow striker Sam Cosgrove made a late substitute appearance but has not scored from open play since 21 December - nine games ago.

That leaves manager Derek McInnes with a big decision to make for Wednesday's Scottish Cup replay with Kilmarnock. Does he start Main for the third game in a row, bring back 21-goal Cosgrove, or even hand the responsibility to Bruce Anderson?

No away comforts for Holt's men

While Livingston have turned the Tony Macaroni Arena into something of a fortress, their sticky away form reared its head again this weekend.

Gary Holt's men have only been beaten twice on home 'plastic' this term in the league, but have just managed to win that same amount on their travels.

To be fair, Lyndon Dykes' late strike was unfortunate not to nestle in the net, while Rangers keeper Alan McGregor continues to defy his years. It's clear Livingston will not be in trouble this season as they sit four points adrift of third place, but turning these tight away defeats into points could be the key to elevating them even higher.

Rangers are currently struggling to find a creative spark in the final third. Arfield apart, very few of their attacking midfielders are chipping in with goals.

There is a certain irony, then, that it is their on-loan midfielder, Greg Docherty, who is providing just that for Hibs.

Many felt the Easter Road side had come off worse in the deal in which Florian Kamberi went the other way, but fellow striker Marc McNulty has returned to Leith and scored four goals already, Christian Doidge has found the net seven times in 2020 alone and, against Kilmarnock, centre-half Adam Jackson scored his second in two games.

However, it was Docherty's fantastic goal, and overall performance, that lit up the win as Hibs start to creep into the battle for a Europa League spot.

Killie have positives despite defeat

Kilmarnock's defeat by Hibs will hurt, with the Ayrshire men creating enough chances to at least earn a draw. Chris Burke littered the penalty box with crosses, while they won a series of second-half corners from which they could not take advantage.

It leaves their chances of reaching the top six difficult, with four points now separating them and Hibs, but all eyes now turn to Wednesday's Scottish Cup tie with Aberdeen.

Although they finished the game pointless against Hibs, Kilmarnock's performance still continued what has been a marked improvement under Alex Dyer and had them on a four-game unbeaten streak. He will still feel they are in a good place to beat Aberdeen and reach the last eight.

At 16:45 on Saturday, the Premiership table was looking very rosy indeed for Tommy Wright.

Three points against Ross County would have taken them above Kilmarnock and into seventh. It would have meant they were level on points with Hibs in sixth and just four points off Livingston in fifth. Quite a turnaround for a side who were bottom of the table just a few months ago.

Billy McKay's late equaliser doesn't change that a great deal, but it will hurt Wright that dropping those two points in Dingwall was entirely of their own doing. They benefitted from Motherwell's naivety in the closing stages earlier in the week and then were guilty of doing exactly the same.

Twice they had the ball in the County half deep into stoppage time, twice they chose not to go for the corner and it came back to haunt them.

They remain unbeaten in their last five games, but it could, and should, have been their fourth win in a row.

Prior to this weekend's draw with St Johnstone, County had lost four of their last five games. Co-manager Stuart Kettlewell described their second-half performance in the 3-1 loss at Kilmarnock a couple of weeks ago as a "capitulation". Against St Johnstone, it looked as though it would be a familiar tale.

After a fairly bright start, Tommy Wright's side took the initiative and had a flurry of chances in the first half that eventually led to them taking the lead going into the break. The Perth side looked better technically and generally showed more fight and hunger to win the game.

But County's response was one that offered hope they can dig deep and avoid being dragged into a relegation battle. Although McKay's equaliser came late and was handed to them by St Johnstone's naivety, their second-half performance merited a share of the points.

County still have just one win in their last 11 in all competitions and need to get a few more on the board to widen that six-point gap with Hamilton in 11th. 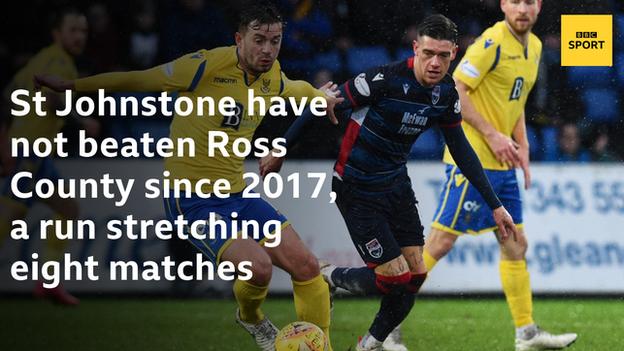 Accies look up for the fight

Guillaume Beuzelin, Hamilton's assistant boss, is certain his team would have moved four points clear of Hearts had they kept 11 players on the pitch.

As it was, their defence, which had stood steadfast for much of the match, was breached for a second time as the final whistle approached and they had to make do with a point.

Hamilton could find themselves at the foot of the Premiership on Friday night if Hearts take something from their trip to 10th-placed St Mirren, yet have improved their chances of avoiding relegation or the play-offs altogether by the Paisley side falling into the scrap.

If it is fight that keeps a team alive, Brian Rice's team have a good chance of staying up. 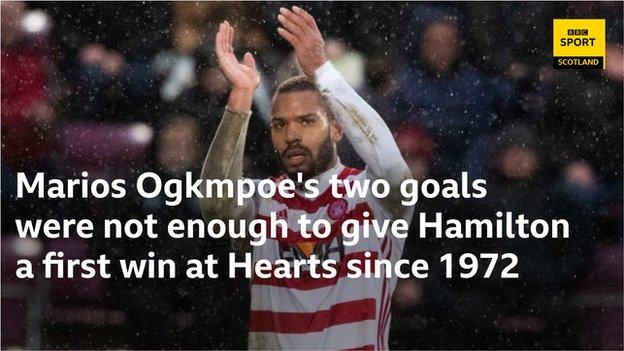 Time running out for Stendel

Clearly, something is not right at Hearts. Their manager, Daniel Stendel, said before the 2-2 draw with Hamilton that he could sense an air of confidence and positivity in the changing room.

Yet, within 16 minutes, his team were all at sea as twice Marios Ogkmpoe had knocked the ball past goalkeeper Zdenek Zlamal, who had come in after on-loan Manchester United man Joel Pereira was dropped.

Had it not been for Jamie Hamilton's red card midway through the first half, many would have fancied Hamilton to have registered their first win at Tynecastle since 1972.

In Jamie Walker, skipper Steven Naismith and Liam Boyce, the Jambos have scorers in their ranks. But it was centre-half Craig Halkett who nodded home three minutes from time to salvage a point.

Stendel said after the match that the problem is not in his players' legs but in their heads. With only 11 games remaining, he does not have long to get through to them.