Diogo Jota made it five goals in two games as Wolves reignited their chase for a Champions League spot with victory against basement side Norwich.

The Portuguese forward was at his lethal best in recording a hat-trick in the 4-0 Europa League victory over Espanyol on Thursday and he took just 19 minutes to add to his tally for the season.

Initially it seemed Matt Doherty's assist would be ruled out for handball but replays showed that the ball bounced against his stomach. When the chance was presented to Jota he turned in one movement and struck a low shot through the legs of Tim Krul.

Jota's second was also reviewed by VAR. The striker was offside when the ball was initially played into the area but drifted back onside to tap in Romain Saiss' volleyed cross.

He came close to a second successive hat-trick as Wolves made it 3-0 soon after the break. His low strike thundered off the post but the loose ball was turned in by Raul Jimenez.

Norwich's brightest spell came in the opening 10 minutes when Teemu Pukki managed a shot at the near post before Kenny McLean's arrow of a strike from 20 yards was plucked out of the air by Rui Patricio.

Canaries boss Daniel Farke might be aggrieved that Wolves full-back Jonny was not punished for stepping on the leg of Max Aarons, who was on the ground following a challenge.

However, of more concern was how his side lost their shape so soon after Wolves scored their opener. They remain seven points adrift of safety with only 11 games remaining.

Wolves, on the other hand, are now two points shy of fifth - which could potentially become a Champions League spot - and five behind fourth-place Chelsea.

Jota and Jimenez back on song

Nuno Espirito Santo's men had only recorded one win in their past seven league games coming into the match, although there were signs his side might have turned a corner during the impressive win over Espanyol.

Jota was the star that evening, taking his tally to nine in the competition this season. However, in the league he had only managed three before Sunday.

But the 23-year-old, who initially joined the club on loan in 2017 when they were in the Championship, seems to have rediscovered his best form - and at the perfect time for Wolves as they push for their best-ever finish in the Premier League.

Nuno will also be hoping Jimenez's first goal in four matches will also send him on a run. The Mexican forward has a great on-field understanding with Jota, and his initial charge from midfield led him to add the third goal.

It was a match where Nuno started winger Adama Traore on the bench, perhaps to keep his potent winger fresh for a final push. The Wolves boss will need all his key attackers on form as the club aim for what could be one of their most memorable seasons.

Is it too late for Farke to change his tactics as his side fight to stay in the league?

His side have won admirers for their attacking intent in matches, but would setting up more defensively, akin to what Steve Bruce has done at Newcastle, reap them more points in the final third of this season? They have the pace and guile on the break with Todd Cantwell and Pukki in attack, supported by the swift full-backs.

It was during an early counter-attack that they caused Wolves problems when Pukki's close-range effort produced a good save from Patricio. And with the wind in their sails they pressed Wolves back again as McLean tested the agility of the Portuguese keeper with a firm long-range effort.

But then the visitors reminded us all why they have the second worst defence in the league - they allowed both Doherty and Jota to turn for the first goal, then three defenders went AWOL as Jota was left alone to tuck in the second.

Norwich had keeper Krul to thank for keeping it at 3-0 after he pushed Ruben Neves' strike on to the bar, then saved Doherty's late header with his legs.

It is Leicester next for Norwich, followed by Sheffield United - their Premier League fate might be all but decided by the first week of March.

No punishment for Jonny 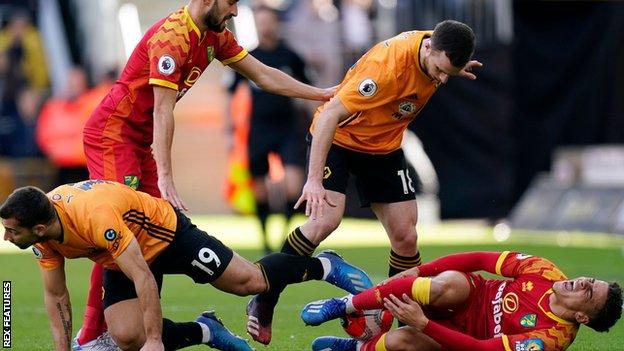 There was one contentious moment prior to the Wolves opener when Jonny trod on Max Aarons' leg when the Norwich player was on the ground following a challenge.

The right-back looked in pain but Jonny's action was judged as accidental. The replay showed the Spanish full-back was trying to hurdle over his opponent and caught him with his boot.

The incident came a day after VAR decided the tackle by Tottenham's Giovani lo Celso's on Chelsea Cesar Azpilicueta did not warrant a red card.

'You need to be convinced and not scared' - reaction

"We know a player's performance can go up and down. It's the right decisions, the right solutions we try to find to keep sustaining his performance - not only him, but all the team.

"Of course, I'm delighted with his goals. It's nothing specific. These things happen. His last touch has been clinical, Thursday and today. Hopefully it continues."

Norwich manager Daniel Farke on needing more from his players: "You have to give your life with each and every duel and I got the feeling that sometimes we were a bit soft and scared.

"We need to be greedy to win the duel, and unbelievably sharp. You need to be convinced and not scared. I think we lacked that and I'm disappointed with that fact."

Norwich host Leicester on Friday (20:00 GMT) and Wolves are at Espanyol on Thursday (17:55 GMT) for the return leg of their Europa League last-32 tie.