France midfielder Paul Pogba expects to leave Manchester United this summer but the club want more than £150m for the 26-year-old. (ESPN)

Pogba is valued at £50m by Real Madrid because he will have just one year left on his United contract in July, although the Old Trafford club could extend that by 12 months. (Mail)

Sane will have a year left on his contract in June and City will sanction his sale this summer following their two-year ban from European football. (Star)

Why are RB Leipzig so divisive?

How Red Bull built a Champions League side from scratch...

Chelsea boss Frank Lampard will come under greater scrutiny should the club fail to secure a Champions League place this season. (Telegraph)

Blues and France striker Olivier Giroud, 33, has been offered a deal by Lazio to join them when his contract expires in the summer. (Le10 Sport, via Star)

Arsenal want to sign 18-year-old winger Bukayo Saka, who has 18 months left on his contract, to a new five-year deal, with Liverpool, Manchester United and Bayern Munich interested in the England Under-19 international. (Mirror)

RB Leipzig's French defender Dayot Upamecano, 21, says he knows he is being "courted", with Barcelona and Arsenal among his admirers. (RMC Sport, via Goal)

Chelsea are tracking 16-year-old Birmingham City midfielder Jude Bellingham, but Manchester United, Barcelona and Real Madrid have also been linked with the England Under-17 international. (Goal)

Barcelona have made Denmark and Leganes forward Martin Braithwaite, 28, their main target after being given permission to sign an injury replacement for 22-year-old France international Ousmane Dembele, having ended their interest in Real Sociedad's Brazilian striker Willian Jose, 28. (Sky Sports)

Manchester City could face further investigation by Uefa into the level of Abu Dhabi sponsorships they declared after being banned from European competition for breaching FFP. (Guardian)

Italy defender Giorgio Chiellini, 35, is set to extend his contract at Juventus for another 12 months. (Goal) 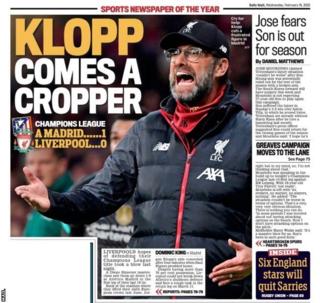