Manchester United are confident of signing Borussia Dortmund and England forward Jadon Sancho, 19, in the summer, but they must qualify for the Champions League. (Sky Sports)

RB Leipzig striker Timo Werner, 23, said he was "proud" to be linked with Liverpool but feels he may not be ready to join what he considers to be "the best team in the world". (Metro)

Barcelona and Argentina forward Lionel Messi, 32, was phoned by LA Galaxy to discuss a transfer to the MLS side. (Express)

Messi has admitted he feels "weird things" are happening at Barcelona amid reports the club hired a social media company to criticise their players. (Mundo Deportivo, via Mail)

Alternatively, Messi feels Barcelona is his "home" amid speculation he could leave the Nou Camp. (ESPN)

Liverpool are planning a move for 23-year-old Werder Bremen and Kosovo midfielder Milot Rashica, who has a £31.5m buy-out clause in his contract. (Bild, via Mirror)

Why are RB Leipzig so divisive?

How Red Bull built a Champions League side from scratch...

France striker Olivier Giroud, 33, insists he will give his all for Chelsea in the coming months despite missing out on a January move away from Stamford Bridge. (Mirror)

Arsenal are interested in Bayer Leverkusen's Germany defender Jonathan Tah, 24, who will be available for 40m euros (£33.4m) in the summer. (Bild - in German)

Leverkusen's 20-year-old Germany midfielder Kai Havertz, thought to be a target of Liverpool, could be available in the summer transfer window, according to the club's sporting director. (Goal)

Arsenal boss Mikel Arteta has admitted he dropped France midfielder Matteo Guendouzi, 20, for Arsenal's win over Newcastle because of poor behaviour in Dubai during the Premier League winter break. (Mirror)

Serie A side Inter Milan will target Napoli's Belgium forward Dries Mertens, 32, in the summer. (Calciomercato - in Italian) 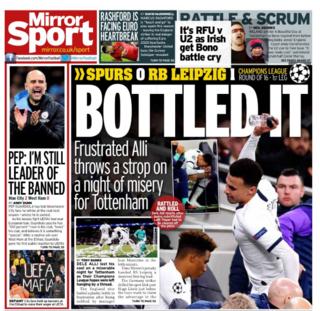