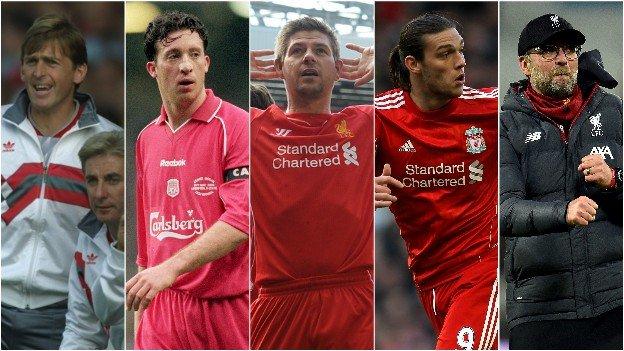 On 1 May 1990, Liverpool's players paraded the top-flight league-winners' trophy around a packed and joyous Anfield.

They would not win the title again for another 30 years but the relative drought was not due to a lack of trying.

Transfers were made, goals scored and games won, but it was never quite enough until this remarkable record-breaking season.

Now that their wait is over, BBC Sport looks back at the players, managers, money and more that Liverpool have put in to the pursuit of number 19.

However, all but 28 of those wins, 70 of those goals and 86 of those points were ultimately amassed in a vain attempt at league glory.

They have won 105 points against Merseyside rivals Everton, while West Ham have been plundered for 101.

They have a 100% win record against Brighton, Cardiff, Huddersfield and Notts County, although the most number of times they have faced any of those sides is the five games they have played against the Seagulls.

Unsurprisingly, the sides that have done the most consistent damage to Liverpool's title aspirations since 1990-91 are Manchester United, Chelsea and Arsenal - all multiple title winners during the Reds' barren three decades.

Gallingly for Liverpool, they have just a 29.3% win percentage against fierce rivals United, who have beaten them 28 times in their 58 games since 1990-91. United also have comfortably the best goal difference against them too, with it currently standing at +8 in the Red Devils' favour.

Birmingham (21.4% win percentage against) and Wimbledon (26.3%) have both been thorns in the Reds' side.

There is only one team against whom Liverpool have played in the top flight and failed to take a single point in the past 30 seasons - Blackpool, who beat them home and away in their one Premier League campaign in 2010-11.

Of course, no Liverpool season of the last 30 has matched 2019-20 for efficiency. In fact, no league campaign in English history is comparable to Liverpool's current one.

As an indication of just why this season is the one that has ended their title drought, compare their 2019-20 stats with their average over the previous 29 seasons…

Since the start of the 1990-91 season, 239 players have represented Liverpool in the top flight.

Their quest for a 19th title began with a 3-1 win at Sheffield United on 25 August 1990, the goals scored by John Barnes, Ray Houghton and Ian Rush. This was one of eight straight victories as part of a 14-game unbeaten run at the start of that season.

Almost 30 years later, the job would finally be completed without the need to step on to the field as Manchester City failed to beat Chelsea, finally ending a title race which in truth had been over for months. 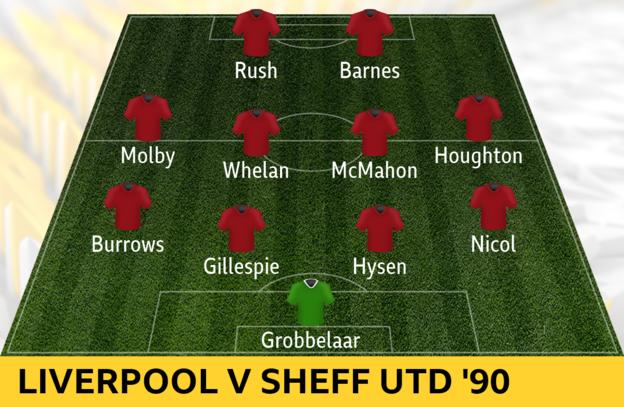 Of those 239 players, academy product Jamie Carragher has made the most league appearances in a Liverpool shirt in the past 30 years, playing in 508 games for the club.

There are some familiar names in the top 10 appearance-makers in that time, but only one member of the current squad makes the list - captain Jordan Henderson, courtesy of his 266 matches.

At the opposite end of the scale is a group of former players who contributed just one appearance to the cause - the likes of Daniele Padelli, David Raven, Jon Newby, Patrice Luzi, Istvan Kozma and Rafael Camacho.

The goalscorers list is also topped by a home-grown talent in Robbie Fowler, who scored 128 league goals for the club over two spells.

There is a much healthier modern presence, with current first-choice front three Roberto Firmino, Sadio Mane and Mohamed Salah all making the top 10.

One player deserving of special recognition is Steven Gerrard, an individual intrinsically linked with Liverpool's long pursuit of their 19th title, for both positive and negative reasons.

The midfielder and captain is a presence on both appearance and goals list, and has also contributed the most assists of any Liverpool player in the past 30 years (70).

He was the driving force behind two of the major trophies the club have lifted since 1990 - the 2004-05 Champions League and 2005-06 FA Cup. Both thrilling 3-3 draws, both won on penalties, both with Gerrard as the game's key man.

It is also impossible to think about a Liverpool title challenge without it evoking two images of the Merseyside-born England international - the first of him in in the middle of a huddle of Reds players, demanding that they "don't let it slip" and the second of him looking absolutely devastated at Anfield having done just that against Chelsea.

Gerrard will never forget how Liverpool agonisingly allowed the 2013-14 title to elude them, but the club have at least now provided a positive moment to supersede it.

Kenny Dalglish delivered Liverpool their 16th, 17th and 18th titles and began the defence of the latter as the Reds' manager. He would leave before that attempted defence was complete, shocking the club by resigning on 22 February 1991, with them three points clear at the top of the table.

A combination of caretaker boss Ronnie Moran and permanent successor Graeme Souness were unable to retain the top-flight trophy, which instead went to Arsenal.

In total, Liverpool have had nine permanent managers since the start of the 1990-91 season.

This includes a rare joint-manager tenure at the start of the 1998-99 season between Roy Evans, who had been in sole charge but to diminishing returns for four seasons, and Gerard Houllier, who would continue on his own after Evans resigned just four months into the shared arrangement.

All but Roy Hodgson (who didn't last a season in the job) and Rodgers (who came agonisingly close) won a trophy with the club.

In Klopp, though, they have finally found a successor to King Kenny's crown. The German is the only Reds manager since Dalglish left (including the Scot himself during his second spell) with a win percentage over 60.

Rosenthal to Minamino - how the Reds spent £1.47bn

Liverpool's first bit of transfer business following their 1989-90 title win was to make Ronny Rosenthal's loan move from Standard Liege permanent for a fee of around £1m.

The Israeli striker, a cult figure at Anfield, would be the first of 218 signings the club would make between their 18th and 19th league triumphs, concluding with the £7.25m capture of Takumi Minamino in the last January window.

Inevitably, there has been the good, the bad and the ugly.

For every Luis Suarez or Virgil van Dijk, there is a Torben Piechnik, a Bruno Cheyrou and a Sean Dundee.

Their most prolific period for signings was between 2005 and 2008, when the club brought in 40 players in just three seasons under Benitez.

This included a number who served them well (Pepe Reina, Dirk Kuyt, Lucas Leiva and Fernando Torres), some not so well (Mark Gonzalez and Jermaine Pennant) and a few many won't remember (Gabriel Paletta and Sebastian Leto anyone?).

Inevitably, the bills have added up over the past 30 years and according to figures from Transfermarkt, the club have spent an estimated £1.47bn on players between their 18th and 19th titles. 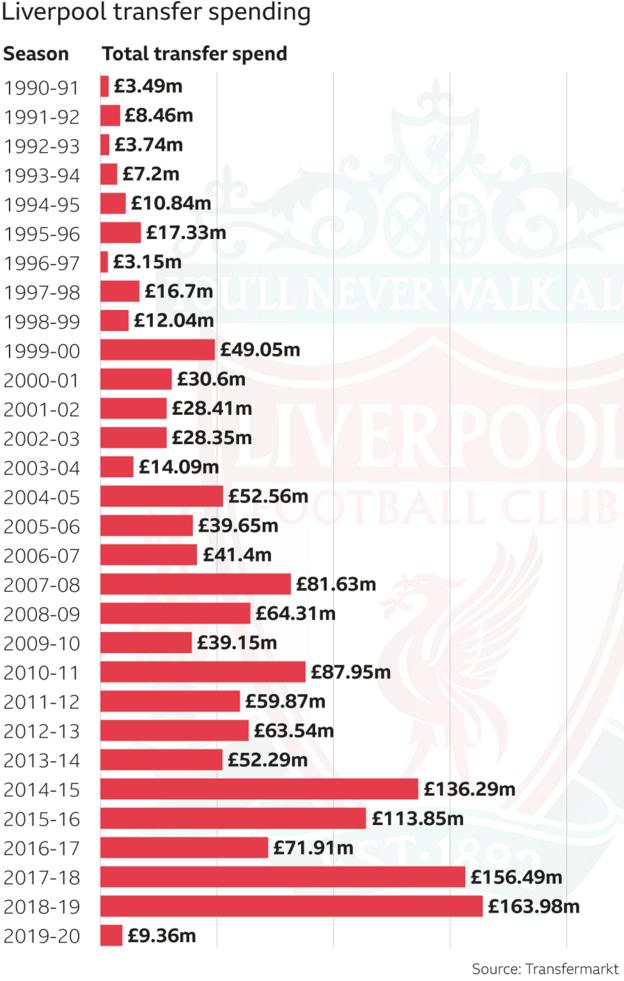 It is important to note the Reds have also recouped a sizeable amount of money through player sales, reportedly £936.6m over those 30 years.

Arguably, the best players that came into the side between 1990 and 2020 are the ones they got for nothing; academy graduates Robbie Fowler, Gerrard, Carragher, Michael Owen and Trent Alexander-Arnold.

At the other end of the scale, though, are the likes of Van Dijk, Alisson and Naby Keita - the top three biggest deals the club have made in that time, with all three playing a prominent role in bringing Liverpool their 19th title.

More often than not in modern football, you get what you pay for.

Players come and go, but the constant at any club is its fans.

The Liverpool supporters have had to wait longer than they imagined for this 19th title and have suffered some agonising near misses.

They will also be denied the true experience of celebrating their side's charge towards the title this season with the last nine games being played behind closed doors due to the coronavirus pandemic.

But prior to this they have continued to show up at Anfield in vast numbers, season upon season.

The difficulty in obtaining season-ticket numbers at the club means gauging an accurate tally of fans to have visited the ground since that celebration at the end of 1989-90 is impossible.

But according to figures from Transfermarkt, the number of visits by supporters to Anfield over the past 30 years is 24,698,942.

And finally, it's time to get a bit shirty...