Atletico Madrid's players were angered by Liverpool boss Jurgen Klopp's complaints after they beat the Reds 1-0 in the first leg of their Champions League last-16 match, and think the German should focus more on his own team's shortcomings. (ESPN)

Manchester City and Barcelona will have to pay in excess of 90m euros (£75m) for Inter Milan's Slovakia defender Milan Skriniar, 25, this summer. (Calciomercato)

Spain full-back Marcos Alonso remains a target for Inter Milan - but Chelsea are set to raise their asking price for the 29-year-old. (Calicomercato - in Italian)

Crystal Palace chairman Steve Parish says he is confident of keeping manager Roy Hodgson at the club after offering him a new contract. (Sky Sports)

Chelsea's Brazil winger Willian, 31, is out of contract at the end of the season but says he has no plans to move his family from their London home. (Mail)

Inter are prepared to offer players to Verona as part of a deal for their Albania defender Marash Kumbulla, 20, who has also been linked with Liverpool. (Inside Futbol)

Lawro faces the stars of This Country

It's the Premier League predictions

La Liga strugglers Leganes are furious Barcelona were allowed to sign Denmark forward Martin Braithwaite, 28, outside the transfer window, and hope they will be granted the same permission to sign a striker. (AS)

Juventus and Inter are interested in signing Chelsea's Emerson Palmieri but have yet to make an official bid for the 25-year-old Italy full-back, according to his agent. (Goal.com)

Chelsea's Denmark defender Andreas Christensen, 23, will be fit to face Tottenham on Saturday having flown to Milan to have a protective mask made after breaking his nose against Manchester United on Monday. (The Athletic)

Manchester United are said to have deemed a move for West Ham midfielder Kai Corbett, 17 - a triallist at Bristol City last month - to be too expensive. (Bristol Post)

Bayern Munich's German goalkeeper Christian Fruchtl, 20, turned down a move to Liverpool last year because he was not prepared to play a substitute role. (Sport1, via Mirror)

Brazil defender David Luiz, 32, believes Arsenal have the necessary quality in their squad to go on and win the Europa League this season after falling at the final hurdle last year. (Evening Standard)

Tottenham's Netherlands winger Steven Bergwijn, 22, faces a driving ban after being caught speeding at 91mph in a built-up area in Eindhoven. (Sun)

Brazilian winger Matheus Pereira could become a permanent West Brom player after the derby against Birmingham next month. When the 23-year-old makes 30 appearancesit triggers the clause in his loan deal from Sporting Lisbon. (Express and Star)

Sunderland are offering a trial to South Shields defender Wouter Verstraaten, a 23-year-old who began his professional career with the academy at PSV. (Newcastle Chronicle)

Manchester City have yet to sell out their most expensive tickets for the Carabao Cup final with Aston Villa on 1 March. (Telegraph)

Borussia Dortmund fans are set to get a three-year away ban at Hoffenheim because of offensive banners aimed at the club's owner. (ESPN)

Paris St-Germain president Nasser Al-Khelaifi, who has been charged by Swiss prosecutors following an investigation into the awarding of tournament media rights, previously agreed to pay Fifa a substantial settlement fee that led to the world governing body dropping a bribery complaint. (Times - subscription required)

Manchester City will not be forced to sell any of their key stars if their two-year Champions League ban remains in place and may even benefit financially from their time out of Europe. (Mail)

Southampton are hoping to re-sign England midfielder Adam Lallana, 31, who is expected to leave Liverpool this summer. (Express)

FA staff will have to move out of Wembley at the end of May when Uefa takes control of the stadium for this summer's European Championship. (Mail) 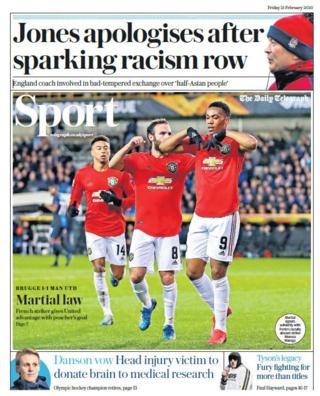 In the Daily Telegraph, "Martial law"