This week may well go down as a pivotal moment in this season's Scottish Premiership race.

Rangers slipped up at St Johnstone while Celtic's relentless domestic form rolled on once more, despite an early scare.

While the basement battle of St Mirren against Hearts was called off, Hamilton's failure to gain victory over 10-man Motherwell in the Lanarkshire derby could prove costly.

Here, we look at the talking points from the weekend's action...

Celtic have title in their sights

As Stevie May equalised for St Johnstone at home to Rangers, 60 miles away Celtic defender Jozo Simunovic was in the process of knocking over Eamonn Brophy in the penalty area, with the Kilmarnock striker picking himself up to give the visitors the lead.

But Neil Lennon's side soon recovered, and, as they have continued to do since the winter break, put their foot back on the accelerator to increase their lead at the top of the Scottish Premiership to 12 points.

Rangers may have a game in hand and there are still two Old Firm games to play, but Celtic's grip on the Premiership trophy is already showing signs of tightening.

Time for Kamberi and Edmundson?

Dropped points for the fourth time in seven games leaves the league title a long way off for Rangers, with manager Steven Gerrard speaking about needing to find solutions after the draw with St Johnstone.

One simple thing he could try is to start pairing Florian Kamberi with the struggling Alfredo Morelos, who has scored just once since Boxing Day. The on-loan Hibernian striker turned the game by scoring and assisting to help Rangers go 2-1 in front, with his guile and urgency causing St Johnstone problems.

At the other end, Nikola Katic has been out of form and was at fault for both goals conceded on Sunday. The Croatian's distribution is ponderous and he seems to switch off at key moments. With Filip Helander still injured, is it time for the promising George Edmundson to appear more regularly?

Given Motherwell's six-game winless run going into the Lanarkshire derby, we can assume that Stephen Robinson would not have been happy to settle for a point before kick-off on Saturday.

However, the Motherwell manager's thinking must have changed after joint-top scorer Christopher Long was shown a second yellow card after just 37 minutes.

Robinson was brave though, switching to a 4-3-2 formation in the second half as they largely shut out Hamilton and could have won the game themselves after late chances for Liam Polworth and Jermaine Hylton.

Although Robinson will take heart from his side's resilience, there might be some concern in attack. It's just one goal in the last five league games for the Fir Park club, and with Long now due to serve a cheap suspension on Tuesday night against St Mirren, Motherwell will need to find a route to goal if they are to use their game in hand to strengthen their grip on third place.

Aberdeen looked good for victory on Saturday before Dean Campbell was shown a second yellow card. Curtis Main and Sam Cosgrove had combined to score an opening goal and Aberdeen were pushing for a second. Yet the red card turned the game on its head.

Not only were Aberdeen now a man down but Derek McInnes seemed to have no intention of bringing on a midfielder to replace Campbell. Instead, Main was tasked with filling in as a makeshift midfielder while Niall McGinn and Connor McLennan chased shadows around the Pittodrie park.

McInnes did eventually make substitutions in the second half. However, instead of bringing on a defensive midfielder or an extra defender, he simply replaced both wingers and only turned to a more conservative player when Dylan McGeouch was introduced for Cosgrove. By that point County had not only equalised but were pushing for a winner - which came five minutes later. 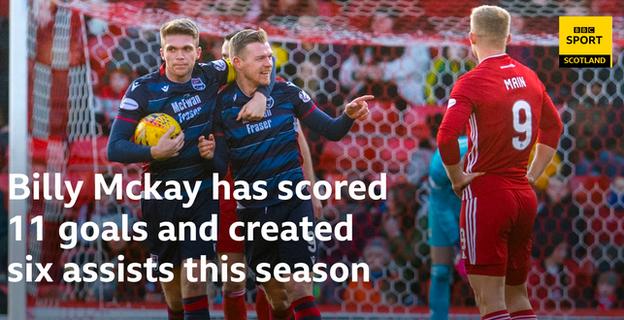 Livingston find steeliness on the road

Livingston's away form has been their Achilles heel throughout the season.

The Tony Macaroni Arena has become a fortress, but this was just Livingston's 11th point in 15 matches on the road. It was an encouraging one though, as we approach the home straight.

Gary Holt praised his side's "hunger" to fight for that point, with Robby McCrorie the main man to thank. He has only conceded four goals in six games since arriving in January, and a Scott Allan penalty was one of several good chances he put a stop to.

With a top-class keeper, Efe Ambrose strolling through his first game in over a year, and potentially a new-found hardiness on the road, Livingston are well on course to push for a third spot both Motherwell and Aberdeen seem insistent on chucking away.

Livingston may have struggled on the road in the past, but gone are the days when a draw against the West Lothian side is looked on with horror.

In truth, Hibs could have taken all three points had it not been for a strong performance from goalkeeper Robby McCrorie.

Scott Allan saw his penalty saved, while Martin Boyle and Greg Docherty were other Hibs players frustrated by the man between the sticks.

The latter put in another busy performance and Christian Doidge added his eighth goal in 10 games but too many others had an off day in the wind and rain.

With third spot looking more and more attainable as the weeks go on, it would be foolish to write off Jack Ross' side as contenders for the European spot but this was yet another lead squandered for a team that seldom looks like keeping a clean sheet.

It has been a trying week for Kilmarnock boss Alex Dyer. His side were twice on the verge of a Scottish Cup quarter-final place in midweek before eventually losing 4-3 after extra time.

He made just one change to his side for the trip to Celtic Park despite the 120 minutes his players had put in on Wednesday, but initially was vindicated as Eamonn Brophy's penalty gave them the lead. But by the end of the 90 minutes it was a third defeat in a row, with Alan Power's red card adding insult to injury.

They now have nine days until their next game which should help ease the injury list, but they have just five games to haul back a five-point gap on the top six.

"That is the message we have got. We have got five games; they are important," manager Dyer said. "It is going to be a tough run in but they are games that, if we want to get to the top six, we have to win."

Striker May rebuilding his reputation

Since his brilliant first spell at St Johnstone earned him a move to Sheffield Wednesday and then Preston, Stevie May has struggled after two serious injuries.

His 75 games at Aberdeen yielded just seven goals and he was becoming a bit of a figure of fun. His confidence looked shot.

However, his equaliser against Rangers was his fifth goal in nine games and coincides with Tommy Wright's side's recent upturn in form, with just one defeat in seven.

May was brilliant against Rangers, consistently hassling their centre-backs and winning flick-ons, particularly in the build-up to Callum Hendry's opener. He never lost the work rate, but it is a relief to see him scoring once again.

County all but safe from relegation

Ross County co-manager Steven Ferguson was the definition of composure after Saturday's 2-1 victory over Aberdeen at Pittodrie.

"We need to try and use this as a springboard," said the coach, as if oblivious of the fact that not only had his team won their first away game since 21 September but were now seven points clear of 10th-placed St Mirren.

Indeed, County haven't been entirely remarkable this season - they certainly haven't managed to match the gusto and performance of Livingston last term upon their arrival in the top flight - but they've spent much of the campaign looking like a solid club. And their determination to take advantage of an Aberdeen red card only proves that.

There may still be plenty of football left to play between now and the end of the season, however it's looking more and more unlikely that the Highlanders will be dragged into the relegation battle with St Mirren, Hamilton and Hearts.

Four points dropped in a week for Accies

Between last week's 2-2 draw away to Hearts, which saw Hamilton take a 2-0 lead, and Saturday's Lanarkshire derby in which they played over half the game with a man advantage, head coach Brian Rice will feel his side have dropped four vital points.

Hamilton seemed to struggle with having the extra man on Saturday, and even though they had some chances to break the deadlock, not enough clear-cut openings were created, and they could have come away from the game empty-handed after Motherwell passed up a couple of late efforts.

The point increases the gap between Hamilton and bottom side Hearts to two points, but the Edinburgh side will have a game in hand after Friday's postponed fixture with St Mirren. If Hamilton were able to find a breakthrough on Saturday, they would have leaped into 10th out of the the play-off spot. These are the small margins that will need to go the way of the Lanarkshire side if they are to avoid the drop again.