Falkirk remain a point behind thanks to Declan McManus' first-half penalty at home to fifth-top Montrose.

Airdrieonians and East Fife consolidate their places in third and fourth respectively.

The former won 2-0 away to Peterhead, while the latter eased to a 4-2 win at home to bottom side Stranraer.

It looked like third-bottom Clyde might avoid a fifth consecutive defeat until 37-year-old MacLean scored from close range - his first goal in four games since joining Rovers, who are now unbeaten in seven.

Falkirk also struggled to a home win after on-loan Ross County striker McManus was sent off following his penalty.

After taking his tally to 21 goals for the season, the 25-year-old was shown a red card for handling the ball on the line with 20 minutes left.

However, Robbie Mutch saved the resulting penalty from Russell McLean and the Falkirk went on to secure a fifth consecutive home win.

East Fife are three points behind but move four ahead of Montrose after a win that leaves Stranraer seven points adrift at the bottom and without a league win since 2 November.

Anton Dowds, Scott Agnew, Daniel Denholm and Ryan Wallace put the home side 4-0 up before the hour mark before Scott Robertson and Joao Vitoria scored quickfire goals to reduce the deficit late on.

Second-bottom Forfar Athletic's game against Dumbarton was postponed because of a waterlogged pitch. 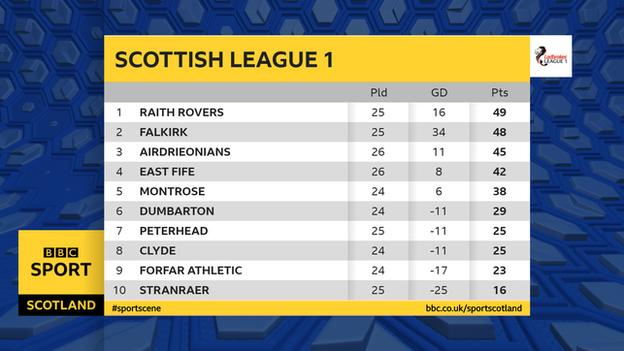