Liverpool have entered the race for Birmingham's 16-year-old English midfielder Jude Bellingham, who could cost about £30m and has also been linked with Manchester United. (Star on Sunday)

Inter Milan are preparing a summer bid for Arsenal's Gabon forward Pierre-Emerick Aubameyang, with a potential £92m at their disposal to bring the 30-year-old to Italy. (Sunday Express)

RB Leipzig's 23-year-old Germany striker Timo Werner - who has been linked with Liverpool - has described Jurgen Klopp as the "best coach in the world". (Mail on Sunday)

'It could ruin football forever'

It was another day of VAR controversy in the Premier League...

Aston Villa's English midfielder Jack Grealish, 24, insists he is taking rumours of a move to Manchester United or Liverpool "with a pinch of salt". (Express and Star)

Manchester City's England Under-21 midfielder Phil Foden, 19, says he is happy to stay at the club rather than go out on loan to secure more regular first-team football. (Manchester Evening News)

Chelsea are interested in Inter Milan striker Mauro Icardi, who is on loan at Paris St-Germain, and could make a move for the 27-year-old Argentina international in the summer transfer window. (Sport Witness)

Manchester United and Serbia midfielder Nemanja Matic, 31, wants to stay at Old Trafford beyond his existing contract, which runs out in the summer. (Sunday Mirror)

West Ham United are favourites to sign Amiens striker Serhou Guirassy in a £23m deal, although Brighton and Tottenham are also interested in the 23-year-old Frenchman. (Sun on Sunday)

Manchester City will "leave nothing off the table" when they attempt to overturn their two-year European suspension, which could end with Liverpool in the dock over allegations they hacked into the Etihad Stadium club's scouting database. (Sunday Mirror)

Juventus and Portugal forward Cristiano Ronaldo, 35, reached an agreement with Real Madrid in 2008 before going on to play for Manchester United for another year. (Manchester Evening News)

Lille and Portugal midfielder Renato Sanches, 22, says he was "forced" to make a loan move to Swansea. (Wales Online) 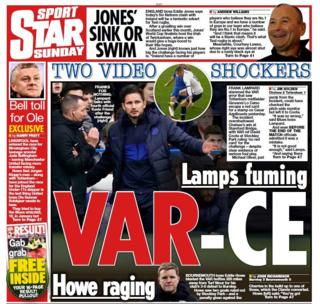 In the Star on Sunday, "Bell toll for Ole"