Just when you thought the EFL was becoming unpredictable, it became predictable again.

The top two sides in the Championship seem to have recovered from their recent wobble and are forging clear of the rest once more after wins on Saturday.

But it's not all about winners and losers - there are some heart-warming stories to tell as well.

Here are five things you may have missed from Saturday's EFL action. 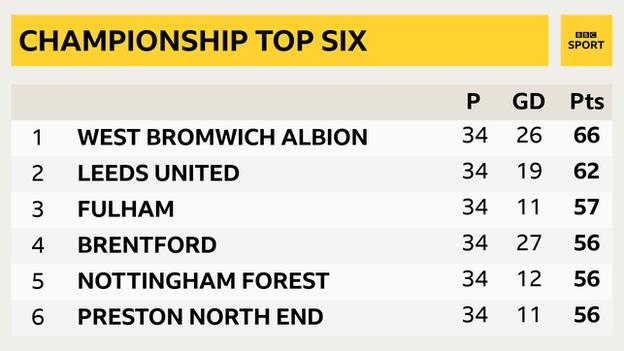 The race for automatic promotion from the Championship looked like it was going to close last month, with leaders West Bromwich Albion going seven without a win and Leeds United subsequently taking just five points from a possible 21.

But rather than being reeled in by the play-off contenders, both sides recorded victories on Saturday and moved clear of the chasing pack.

Albion made it four wins in five games as they cruised to a 3-0 win at Bristol City, while Leeds overcame Reading 1-0 to register consecutive wins for the first time since December.

It is the rest of the top six who are faltering now, with third-placed Fulham and fourth-placed Brentford unable to put pressure on Leeds. The Whites drew at Derby on Friday and the Bees had to fight back from 2-0 down to take a point against Blackburn in Saturday's early kick-off.

Nottingham Forest missed the chance to go third as Sabri Lamouchi's side played out a goalless stalemate with mid-table QPR, leaving the four sides in the play-offs separated by just a point after Preston came from behind to beat Hull.

Albion have established a nine-point gap to third, with Leeds five points ahead of Fulham following back-to-back wins at Elland Road. Respective coaches Slaven Bilic and Marcelo Bielsa have a bit of breathing space - until the midweek round of fixtures, at least.

Coventry City are enjoying a fine run at the moment and made it five wins on the bounce in League One as they won 2-1 at Rochdale.

The Sky Blues, who are 11 games without defeat in the third tier, are only second behind top-of-the-table Rotherham United on goal difference.

Their form is even more remarkable given the club are playing their home games at Birmingham City's St Andrew's this season after failing to agree a deal to stay at the Ricoh Arena.

Goals from Michael Rose and Matt Godden gave Mark Robins' men all three points at Spotland, despite Aaron Wilbraham pulling a goal back for Dale.

"I didn't think it was a great performance as conditions were tough," Robins told BBC Coventry & Warwickshire.

"It is a brilliant three points but we have to keep things going and move on from it quickly. We know how difficult the league is, so we need to be on our best form.

"Nobody has spoken about us all season and we will quietly go about our business and see where it takes us."

On their best run since 2015, Coventry have a chance to go top of the table on Tuesday when they host the Millers - with the Sky Blues looking to return to the Championship for the first time since 2011-12.

More managers than wins this season

You have to feel for Stevenage.

Rooted to the bottom of League Two, they have now had more managers (four) than they have league wins this season (three).

Former striker Alex Revell was appointed as manager until the end of the season after Graham Westley's resignation on Sunday.

He joins Dino Maamria, who was sacked in September, and former England women's manager Mark Sampson, who had a spell in caretaker charge, on the list of men who have led the club in a league fixture this campaign.

But it was not the start that 36-year-old Revell would have wanted, as Stevenage lost 2-0 at mid-table Crawley Town.

A goal from Beryly Lubala midway through the first half and Ashley Nadesan's strike in second-half stoppage time inflicted a seventh successive league loss on Stevenage - the first time that has happened since they were promoted to the EFL in 2010.

The club's last victory was a 4-0 win away at Cambridge United on 18 January - that was their first since 26 October - and they are still eight points off safety in the only relegation place in League Two.

While Bury FC's future is still up in the air, Bury AFC - a club set up by fans following the Shakers' expulsion from the EFL last August - has applied to play in the 10th tier of the English football pyramid next season.

The effect that the absence of regular football has had on the town of Bury and the businesses around Gigg Lane has been profound, with no matches being played there since pre-season.

Step up 300 fans of League One leaders Rotherham United, who stopped off on their trip up to Accrington to have a couple of pints in the pubs around Gigg Lane.

It seemed to bring the Millers some luck as well - Ben Wiles' goal in second-half stoppage-time saw them win 2-1 against Stanley to keep them top of the third tier.

It has been a lean few years if you are a fan of Crewe Alexandra, but the club's latest batch of youngsters are giving the locals plenty to cheer.

With 12 games still to play, Crewe are second in League Two and are only one point away from matching last season's tally of 65.

Saturday's 2-0 win over neighbours Macclesfield was their seventh in a row at home in the league - something Crewe have not managed since 1992, when Neil Lennon and Craig Hignett were part of their squad.

"There are little bits that we can learn from, but overall it was a thoroughly professional performance," manager David Artell told BBC Radio Stoke.

Crewe are on course for only their second top-half finish in eight years - and could achieve a lot more than that if their good form continues.