As Turf Moor collectively lost its head on Saturday, Sean Dyche stood in his technical area, calmly keeping his.

These were not normal circumstances. Seconds earlier, Bournemouth thought they had equalised at Burnley. But a video assistant referee review spotted a handball at the other end, right at the start of the move. Bournemouth's goal was disallowed - and Burnley were awarded a penalty as play was pulled back. Mayhem.

The fans were up and down. The players too. But Burnley's boss remained unmoved.

This is Dyche's Turf Moor tenure in microcosm - the Clarets can be hot and cold, but he remains unflappable at their centre.

That level-headed approach is a key factor in the club over-achieving so often during his seven and a half years in charge.

He watched on as Jay Rodriguez scored that penalty, the second goal in a 3-0 win. It means Burnley are eighth in the Premier League - pushing, impressively, for European qualification.

Realistically, this means the Europa League - the competition in which they reached the play-off round in 2018-19 - but who is to say they can't make a late play for the Champions League? 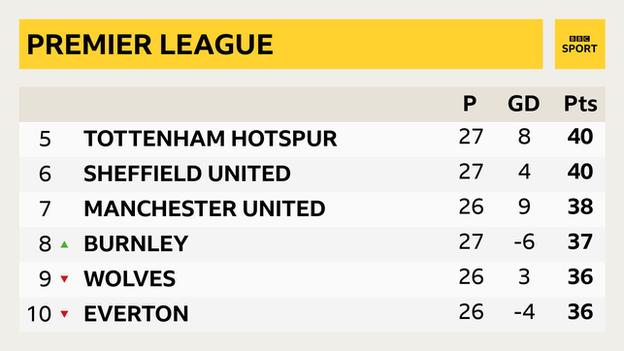 Manchester City's European ban (pending appeal) has opened up the field and there are just seven points between the Clarets and Chelsea in fourth.

It is a far cry from six weeks ago, when the Clarets were comprehensively beaten 3-0 at Stamford Bridge, leaving them three points above the bottom three and, in the minds of many a pundit, destined for a relegation battle.

Not that Dyche's post-match mood gives much indication as to the rapidly changing fortunes of his side.

Win, lose or draw, his interviews are good humoured and largely dispassionate. Saturday's was no different.

On Bournemouth: "I thought Bournemouth were very good first half, better than us. I really like Eddie's teams and they did not look like a team who are on the kind of run they are having."

On the VAR decisions: "It is a strange day for VAR. A tough day for it. That is as tough as it gets. If I am part of their club - staff, players fans - it is hard to take, but I don't think it will happen many times in its use."

On his style of play: "I want the players to play hard because it is a physical, hard game. When you do it right - people playing hard for their shirt, team-mates and club - and you're not falling around every two seconds, what is wrong with that?"

'Never too up, never too down'

Club insiders testify to this balanced, philosophical stance being extended to the training ground on a Monday morning after a game. What is gone is gone and it is back to business with boundless, infectious positivity.

What springs to mind is Rudyard Kipling's take on success and failure in his poem 'If'.

While Dyche might look and sound like a managerial throw-back and he may share Bassett's loyalty to 4-4-2, he has long since made fools of those who would bracket him as the kind of old-school long-ball merchant who would write his starting XI on the back of fag packet.

Former Burnley player Michael Kightly recently likened him to one of English football's finest managers, Brian Clough, citing the blunt simplicity of his message as a defining quality.

"The main thing I like about Dyche is that he is never too up and too down," Kightly told Talksport. "If you lose a game 3-0 on a Saturday, he is not going mental and having you in on a Sunday, and running you.

"At the same time, if you win 3-0 and play really well, he is not saying that you're brilliant and we've made it. He keeps a level ground."

Dyche himself continues to preach the mantra he offered upon joining Burnley in October 2012, that they must foster a "one-club mentality" that ensures all members - from the chairman, through the board, manager, players and fans - pull in the same direction.

Such beliefs have armed Burnley's players with the tools not only to achieve unexpected highs but also equip them to deal with the inevitable lows.

Promotion to the Premier League in his first full season in charge in 2012-13 was followed by immediate relegation back to the Championship. But with the continued backing of the club and fans, Dyche took them straight back up.

In recent seasons - even within a season - Burnley can swing from one extreme to the other. They went from qualifying for Europe in 2018 to battling relegation last season. During that struggle last term, they managed one win in 12 games from October to December - then pulled clear of trouble with an eight-match unbeaten run.

The pattern has continued this season. Twice in 2019-20 the Clarets have lost three games in a row, but each time they have responded with successive victories.

They have just taken 13 points from a possible 15, having lost four in a row before that.

For every winner in football, though, there is a loser and as Burnley edged further up the table, Saturday's result plunged Bournemouth further into trouble.

It might not be immediately apparent from their respective styles of play, but Dyche and Cherries boss Eddie Howe share a lot of managerial DNA.

It was Howe's departure from Turf Moor (to eventually return to Bournemouth) that opened the door for Dyche in Lancashire back in 2012, making the pair the second and third longest-serving managers in England's top four leagues, after Wycombe's Gareth Ainsworth.

Like Dyche, Howe has relied on 4-4-2 during this season and offers a similarly dispassionate take on games afterwards, regardless of result.

"It was so difficult for the players today," he said after Saturday's game. "We fell apart a bit mentally after the second VAR decision, but up until then I thought we were the better team.

"But we have to use this as extra fuel, extra motivation. People can perceive things are going against you but we have to use it to create a siege mentality in pursuit of us staying in the division."

Dyche and Howe are also equally indispensable to the playing side of their respective clubs. Remove their block from the Jenga tower and you sense the whole lot would come tumbling down.

If the worst does happen for Bournemouth this season, Howe has the backing and brains to survive a cull that befall most other managers in such circumstances.

If he needs inspiration for how to bounce back from adversity, he need only look to the club he left in 2012 - and the man who succeeded him.