Paris St-Germain coach Thomas Tuchel is thought to be in talks with Bayern Munich over a move back to his native Germany. (90 Min)

Who makes the team this week?

It's time for the Garth Crooks Premier League team

Paris St-Germain and Uruguay forward Edinson Cavani, 33, says January was "difficult" after a move away from the club did not materialise and negotiations over a new contract, which expires in June, stalled. (Goal)

Villa are targeting 13-year-old striker Daniel Akinleye, from French third-tier club Quevilly-Rouen Metropole. However, Akinleye, who was born in France to Nigerian parents, wants to follow in the footsteps of Nigeria forward Odion Ighalo, 30, and play for Manchester United.(Birmingham Mail)

Real Madrid's 19-year-old Brazilian forward Rodrygo will miss Sunday's Clasico at home to Barcelona through suspension after being sent off for goading the opposition goalkeeper after scoring for the club's second team. He was being tipped to come into the starting XI to replace the injured Eden Hazard. (Goal)

Rangers are interested in West Brom's Rayhaan Tulloch. The 19-year-old English winger is out of contract at the Hawthorns this summer. (Mirror)

Manchester City will train at Atletico Madrid's ground on Wednesday morning before their Champions League last-16 match against neighbours Real at the Bernabeu that night. The Wanda Metropolitano was the venue for last season's final. (AS) 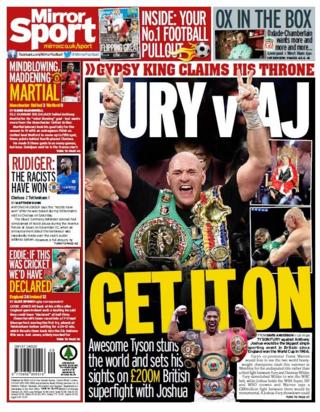 In the Mirror, "Ox in the box"