Arsenal could be forced to sell Gabon forward Pierre-Emerick Aubameyang if they fail to agree to terms over a new contract, with the 30-year-old's present deal expiring in 2021. (Star)

England winger Jadon Sancho, 19, could remain with Dortmund beyond this season despite being linked with a summer move to Chelsea, Liverpool or Manchester United. (Ruhr Nachrichten - in German)

RB Leipzig's Germany striker Timo Werner, 23, linked with Liverpool, has an exit clause of 30m euros (£25m) plus a guarantee of performance-related bonuses, rather than £50m as initially believed. (Sport1 - in German)

Leicester City are considering offering Christian Fuchs, 33, a new deal as the Austrian defender approaches the end of his contract. (Mail)

Manchester United midfielder Nemanja Matic, 31, is expected to leave when his contract ends this summer, with his agents already assessing options, but AC Milan are not interested due to the Serbian's wage demands. (Calciomercato)

Arsenal's Swiss midfielder Granit Xhaka, 27, says he feared he would never play for the club again after the rant at supporters that led to him losing the captaincy - and has reservations over whether he would take the job again. (Evening Standard)

Smalling says he has "an interesting decision to make" - staying with Manchester United or moving to Roma permanently. (Sky Sports)

Manchester United are also interested in Juventus' 32-year-old defender Blaise Matuidi, with Arsenal joining the race for the Frenchman. (Calciomercato via Express)

Tottenham boss Jose Mourinho is interested in Brazil's Willian, 31, after working with the Chelsea winger when he was manager at Stamford Bridge. (Star)

Bayern Munich chief executive Karl-Heinz Rummenigge is yet to be totally convinced by Brazilian forward Philippe Coutinho. The German club has the option of making the 27-year-old's loan move from Barcelona a permanent transfer at the end of the season. (Bild, via Mail)

The father of Chelsea's Spanish left-back Marcos Alonso, 29, has hinted that his son will return to Italy, having played for Fiorentina before moving to Stamford Bridge. (Calciomercato - in Italian)

Leeds are eyeing four summer deals which could amount to £45m in transfer fees should they gain promotion to the Premier League. (Express)

Arsenal's England Under-21 striker Eddie Nketiah, 20, believes it was his intensity in training that convinced Mikel Arteta to recall him from a loan spell at Leeds and into the first-team squad. (Football.London)

Nketiah has hailed the influence of Alexandre Lacazette and says there are no issues with the 28-year-old France forward, who has been left out of the Arsenal team in recent weeks. (Goal.com)

Manchester United will offer trials to two Polish 16-year-old defenders, Mateusz Lipp, who is a part of the Akademia 'Ruch' Chorzow academy and has previously been on trial with Arsenal and Sampdoria - plus Radoslaw Sewerys, who plays in the Polish top flight for Korona Kielce. (Express)

Middlesbrough have upped the price for defender Dael Fry, 22, to £25m following interest from Burnley. (Sun via Teesside Gazette)

Hollywood actor George Clooney, 58, is in talks to buy Spanish second tier side Malaga FC. (AS) 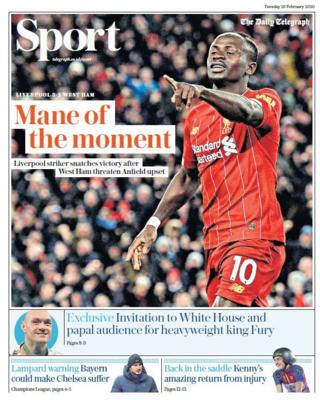 In the Daily Telegraph, "Mane of the moment"