West Ham United are a club riddled with discontent off the field - the black balloons of protest and the banners criticising the ownership being brandished at Anfield provided hard evidence of the anger - but there were signs of life on it.

Manager David Moyes wore a familiar pained expression at the final whistle. It was the 16th time he has disappeared down the tunnel here without the win over Liverpool he craves.

The Scot has lost nine times and drawn seven since his first visit as Everton manager back in December 2002. This must have been as agonising as any as West Ham United slipped to a 3-2 defeat.

And yet, for 14 minutes, it looked like the Moyes nightmare might be coming to an end as West Ham led the runaway Premier League leaders, leaving Liverpool fighting to avoid their first league defeat of the season - indeed their first since losing at Manchester City on 3 January 2019.

Instead, the nightmare visited the normally reliable Polish goalkeeper Lukasz Fabianski who, after a poor effort to allow Georginio Wijnaldum's early header to creep in, let Mohamed Salah's tame effort squirm through his legs for the equaliser to make it 2-2.

Moyes turned away, perhaps sensing the fates were against him in front of the Kop again, and so it proved as Sadio Mane scored the late winner.

West Ham's supporters applauded their players at the end. They had given everything but came up short.

The trick for Moyes now is to get West Ham to repeat this sort of effort on a regular basis between now and the end of the season.

The night started on a discordant note with the expected show of discontent from West Ham's supporters in their section of the Anfield Road Stand.

In the moments before kick-off the black balloons, the signal of protest, were inflated and banners were unfurled reading "Karren Brady - You're Fired", "Sullivan This Charmless Man," "Run Like A Circus Owned By Clowns" and "State Of The Art Retractable Promises".

It was a sign of how the relationship and trust has broken down on the fans' part. There were plenty of colourful chants against the owners but suddenly spirits soared by what West Ham's followers saw on the field.

If there is nothing that can repair the rift between fans and owners, then at least there was a connection with the team at Anfield. West Ham remain in the relegation zone after this result but they can at least take some solace from the manner in which they performed.

When many expected West Ham to subside after Wijnaldum's ninth-minute goal, the opposite occurred as Issa Diop quickly equalised and when substitute Pablo Fornals put them ahead early in the second half Liverpool could have few complaints.

Moyes has been justifiably accused of conservatism throughout his career - in 11 seasons at Everton he never won a league game at Arsenal, Chelsea, Liverpool or, until he managed them, Manchester United.

It has long been his Achilles heel and a rich source of material for his critics. He has never quite been able to let his teams off the leash.

Moyes could not be accused of this here. Yes, understandable caution facing the fierce firepower of Liverpool's attack, but West Ham certainly never hid behind the door waiting to be beaten. The attitude was positive.

Tomas Soucek, signed on loan from Slavia Prague with an option for a £13m permanent deal, showing promise and physical presence before succumbing to injury, while Declan Rice also distinguished himself.

Moyes, rightly, talked up many aspects of his side's performance despite the loss but - in display if not result - a measure of standards has now been set.

It is no good West Ham giving Liverpool a run for their money, albeit in a losing cause, if bad habits return at home to Southampton on Saturday. 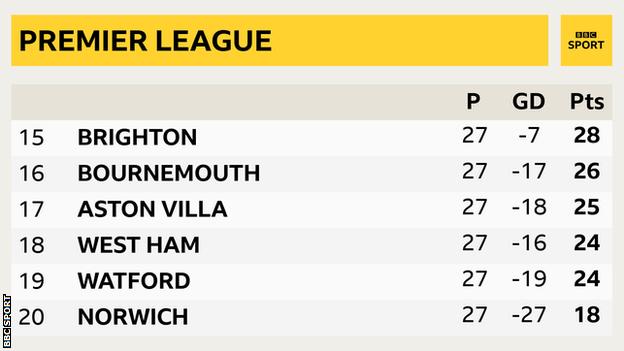 When Moyes arrived at West Ham he announced, somewhat boldly: "I think there's only two or three managers with a better Premier League win record. That's what I do - I win."

And therein lies the current problem, despite all the good work at Anfield, Moyes has not been winning.

Moyes has only won once in eight league games since succeeding Manuel Pellegrini, and that a 4-0 victory over Bournemouth in his first game on 1 January. Since then, he has lost five and drawn two.

This was a good performance by West Ham. Moyes was progressive compared to previous Anfield visits.

Now he must back up his words with wins.

If West Ham can produce the same levels of effort, resilience and character it should be enough to get them away from trouble with results against teams less driven and without the same sense of destiny and sheer quality as Liverpool.

Moyes and West Ham's players could take plenty with them back to east London as they pulled on to the M62 late on Monday night - but now they need points to accompany them on their journey to safety.