Borussia Dortmund's England winger Jadon Sancho, 19, is not thinking about his future despite speculation linking him with a summer move to Manchester United or Liverpool. (Mail)

Tottenham Hotspur are lining up a summer move for Watford's Ben Foster. The 36-year-old England goalkeeper is out of contract at Vicarage Road this summer. (Sun)

Spurs also want to beat Roma to the permanent signing of Manchester United's 30-year-old England Chris Smalling, who is on loan this season at the Italian club. (Calciomercato - in Italian)

Inter Milan chief executive Giuseppe Marotta thinks the Serie A season may not finish if they cannot find a solution to the coronavirus crisis. (Mail)

Uefa will hold hold emergency talks this week amid concerns the coronavirus outbreak could lead to postponements or even cancellations in the Champions League or Euro 2020. (Mirror)

Who made Garth's team of the week?

The Football Association is urging caution over proposals to change the offside law that would require clear daylight between defender and attacker, warning there will be "unforeseen circumstances" to such a move. (Times - subscription required)

Manchester United are monitoring Stoke City defender Nathan Collins. The Republic of Ireland Under-21 international, 18, has only made 12 first-team appearances for the Potters. (Sun)

Arsenal manager Mikel Arteta may only have a small transfer budget this summer if they miss out on Champions League football next season. (Goal)

Crystal Palace's 24-year-old Norway striker Alexander Sorloth striker, who is on loan at Trabzonspor this season, is being tracked by Sheffield United, Aston Villa and Newcastle United.(HITC)

Palace players have urged manager Roy Hodgson to sign a new contact at Selhurst Park. The 72-year-old's deal expires at the end of the season. (Telegraph)

Chelsea target Dries Mertens, 31, is close to signing a new deal at Napoli. The Belgium forward's contract is up this summer. (Sun) 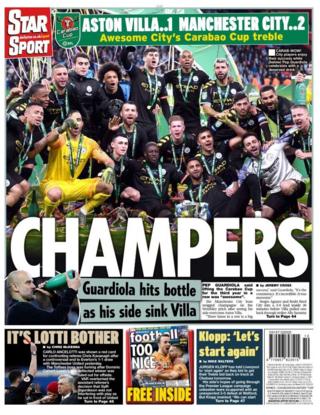