United are set to battle Liverpool to secure the signing of Sancho for £100m, along with RB Leipzig's 23-year-old Germany forward Timo Werner. (Express)

Real Madrid and Paris St-Germain are also monitoring Sancho, who favours a move back to England. (Mirror)

Meanwhile, Werner unfollowed Leipzig on Twitter after they used an image of him in response to Liverpool's first Premier League defeat of the season. (Echo)

The stats behind the Hornets' surprise win over Liverpool...

Leipzig manager Julian Nagelsmann would like to keep left-back Angelino, who is on loan from Manchester City, at the club - but says the 23-year-old Spaniard's "hefty price tag" for a permanent move could be a problem. (Kicker - in German)

English defender Mason Holgate, 23, says his focus is on Everton amid interest from clubs such as Manchester City. (Mail)

Everton's scout in Italy says the club "know what to do" regarding a move for Napoli's Mexico winger Hirving Lozano, 24. (Area Napoli, via Star)

Scottish champions Celtic are attempting to tie 22-year-old France Under-21 forward Odsonne Edouard to a new contract amid interest from the Foxes. (Record)

Winger Allan Saint-Maximin, 22, could leave Newcastle United after a falling out with boss Steve Bruce, with Crystal Palace and Wolverhampton Wanderers interested in the Frenchman. (Mail)

Porto's 27-year-old Brazil defender Alex Telles, who is a Chelsea target, has rejected a contract extension at the Portuguese club. (A Bola, via Sun)

Aston Villa and David Beckham's MLS franchise Inter Miami are both interested in signing 30-year-old England striker Daniel Sturridge, who is a free agent but banned until 17 June. (Sun)

Arsenal boss Mikel Arteta is concerned failure to qualify for the Champions League this season will see the club struggle to attract players. (ESPN)

The Gunners have long been interested in Upamecano and were close to making a £50m bid in January. (Express)

Meanwhile, Arsenal could be interested in Wolves and Mexico forward Raul Jimenez, 28, to replace Alexandre Lacazette, if the 28-year-old Frenchman leaves at the end of the season. (Express) 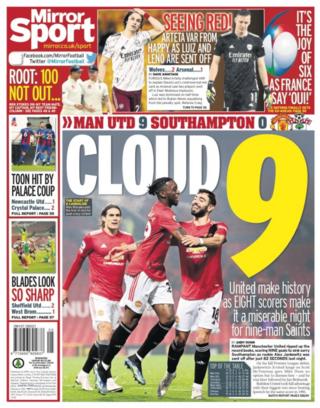