Scotland will face two more games with Israel after being drawn with them - as well as the Czech Republic and Slovakia - in the 2020-21 Nations League.

Steve Clarke's side will play their three League B rivals home and away in the autumn.

It means a fourth and fifth meeting with Israel inside two years.

The sides meet at Hampden on 26 March in the Euro 2020 play-off semi-finals, having already played home and away in the inaugural Nations League.

The draw for the 2020-21 staging also gives Scotland a first game with the Czechs since a March 2016 win in Prague, and a first with the Slovaks since beating them at Hampden in October 2017.

Andi Herzog's Israel are ranked 93rd in the world - the lowest of any side in the pool, with Pavel Hapal's Slovaks 32nd and Jaroslav Silhavy's Czechs 45th.

In fact, Slovakia are the last top-50 side Scotland beat in a competitive match.

Israel finished behind Scotland in the last Nations League, with the both triumphing in their respective home games.

Both were promoted to League B and will meet later this month for the right to visit Norway or Serbia for a place in this summer's Euros.

It is also the second Nations League in a row in which the Czechs and Slovaks have been drawn together, with the former winning both games. 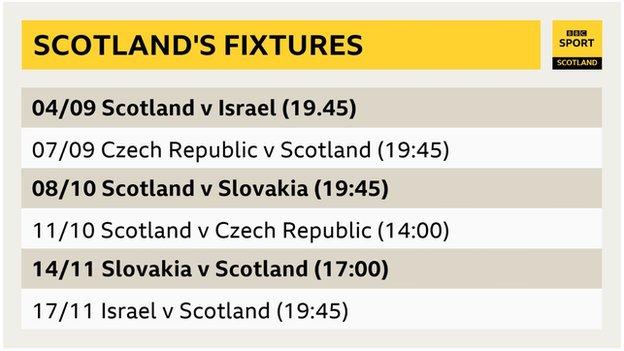 How will it work this time?

The format has been tweaked this time round, meaning Scotland are in a four-team group rather than three.

The group winners will again be promoted the subsequent Nations League campaign, but will not automatically secure a play-off for a major finals.

The 2022 World Cup qualifiers begin in March 2021, with the 10 group winners reaching the finals in Qatar.

The 10 runners-up, plus the two best ranked Nations League teams that have not already qualified will contest the play-offs in March 2022.

Fixtures for 2020-21 Nations League will be played home and away between September and November.

Who are Scotland's opponents?

Head coach: Jaroslav Silhavy took charge in 2018 and guided his side to a 2-1 home win over England in October, ending their 43-game unbeaten run in qualifiers.

Record against Scotland: The Czechs have won four of their six meetings with Scotland, but the last time they went head-to-head, in March 2006, a breakaway goal from Ikechi Anya after 10 minutes secured an impressive 1-0 for the visitors in Prague.

One to watch: Roma loanee Patrik Schick has impressed this season at RB Leipzig, with seven goals in 17 games. The Bundesliga side have the option to buy the Czech international at the end of the season.

Head coach: Pavel Hapal played 86 games for Bayer Leverkusen between 1992-1995 and was given the job in 2018 following a spell managing Slovakia's Under-21 side and a short spell at Sparta Prague.

One to watch: Inter Milan centre-back Milan Skriniar has made his mark in Serie A this season, with Manchester City and Barcelona are rumoured to be interested in the 25-year-old.

Head coach: Andi Herzog amassed 103 caps for Austria and had spells at Bayern Munich, Werder Bremen and LA Galaxy. The 51-year-old took charge in 2018 following spells as assistant with Austria and United States.

Record against Scotland: The two sides are becoming familiar foes. In November 2018, James Forrest's hat-trick helped secure Scotland's play-off place in a dramatic 3-2 win to finish top of their group.

One to watch: Scottish football will be familiar with Hibernian goalkeeper Ofir Marciano and Celtic pair Hatem Abd Elhamed and Nir Bitton, but forward Eran Zahavi is the man to watch. Playing in the Chinese Super League with Guangzhou, the 32-year-old has scored 99 goals in 110 games for the club.

When are the matches?