Kane is not planning on signing a new deal at Tottenham. (Express)

Arsenal could offer England defender John Stones, 25, a route out of Manchester City at the end of the season. (90 Min)

The sporting director of RB Leipzig says the club have not received an approach for 23-year-old Germany striker Timo Werner, amid interest from Liverpool, Chelsea and Manchester United. (Mirror)

Manchester City's Spanish left-back Angelino, 23, who is on loan at RB Leipzig, says he could depart City if their Champions League ban is upheld. (MEN)

Birmingham have denied that they have received an offer from Dortmund for Bellingham. (90 Min)

Meanwhile, Dortmund could ask for as much as 140 million euros (£121m) for England forward Jadon Sancho, 19. (Bild - in German)

Chelsea's Brazilian forward Willian, 31, is set to reject a new contract and could be interested in a summer switch to rivals Tottenham. (UOL)

Chelsea could need to pay as much as £40m to sign Porto's Brazil defender Alex Telles, 27, as a replacement for Spain left-back Marcos Alonso, 29. (Sun)

Atletico Madrid will move for Barcelona's Croatia midfielder Ivan Rakitic, 31, in the summer. (Marca - in Spanish)

Everton, West Ham and Wolves are in the race to sign 24-year-old Mexico winger Hirving Lozano from Napoli. (Calciomercato - in Italian)

Inter Milan would demand three players from Barcelona if the Spanish champions want to sign Argentine striker Lautaro Martinez, 22, in the summer. (Mundo Deportivo, via Mail)

Schalke's German goalkeeper Ralf Fahrmann, 31, currently on loan at Norwich, is in talks to end his spell at Carrow Road and join Norwegian side SK Brann. (Sky Sports)

Napoli winger Jose Callejon, 33, linked with Aston Villa and Everton in January, could be set for a return to his Spanish homeland. (Birmingham Mail)

Arsenal will subsidise coach travel for fans after their Premier League match at Manchester City was swiftly rearranged for next week. (Evening Standard)

Former Everton keeper Tim Howard has come out of retirement at the age of 40 to sign for Memphis 901 FC. He is a minority owner of the United Soccer League side. (SB Nation) 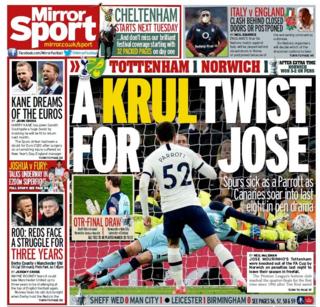 In the Daily Mirror, "A Krul twist for Jose"